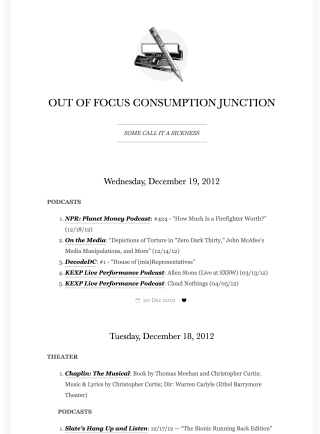 It was just two years ago that I learned a completely new-to-me use of the word “memorialize” when I heard James Comey (followed by news anchors, pundits, and especially legal analysts )describe having “memorialized” all his conversations with then-president, Donald Trump.

As I say in my sidebar, “Context is everything,” and at least to me, the use of any form of “memorial” generally refers to commemorating someone or something lost and revered. We celebrate the lives of presidents and civil leaders; honor those who fought and died in war; and remember tragedies that we want to ensure nobody forgets.

But “memorialize” a conversation? Definitionally, I suppose it works: The second listed definition for “memorialize” according to oed.com (accessible for free via most public library websites with your library card, FYI) reads, "To preserve the memory of; to be or supply a memorial of; to commemorate."

The idea “to preserve the memory of” particularly interests me. As Comey, et al.’s usage seems common in legal practice, I suppose attending law school would have forced my surprise a couple decades ago rather than in 2019.

But even outside any legal context, I love the idea of “memorializing” in this manner, and in my case, I suppose I enjoy memorializing, well ... everything.

You see, I’m a packrat. Obviously I don’t refer to the actual rodent; but rather “a person who collects or hoards especially unneeded items.”

In my case, any metaphorical resemblance to the genus Neotoma is a genetic anomaly that I can definitely trace back at least two generations on my paternal side.

For at least the last half-century of his life, my dad memorialized nearly every life event—large or small—in his pocket “Day-at-a-Glance” calendar. He kept copious notes concerning anything he considered important or interesting, categories that often included items others would have found esoteric or anodyne.

He also kept everything. Though I was always cognizant of this fact, until he passed away, and I spent several hours perusing his files, I never actually knew to what extent.

To be fair to my father (and, I suppose by extension, to myself as well), I can state with certainty that he inherited these qualities from his mother, my grandmother. Fifty years of photo albums—well-organized and (mostly) thematically and/or temporally consistent—squeezed in to the den’s built-in shelves of my grandparents’ apartment provide just one of many examples.

Before moving out of the apartment, she asked if anyone in our family wanted to take these albums. She thought, for example, that I might want the one she had made for my parents’ 1965 wedding.

Sure. Perfectly normal. As is keeping event-specific printed items, such as a cocktail napkin or matchbook. (1965, remember?) But what about ...

For when I first looked through my parents’ wedding album, included on one page with the aforementioned cocktail napkin and matchbook, I discovered what by that point was an approximately 40-year-old cookie from the reception. It sat in a crushed paper serving bowl, clinging to the sticky album page, under the cellophane cover sheet.

The cookie appeared mostly intact until I tried turning the page, and it instantly crumbled. The covers and binding of the album fell apart too soon after I removed the album from its long-time resting place, virtually never perused considering the central celebrants of the memorialized event had divorced three decades earlier.

Today’s preamble is brought to you by my predilection to memorialize. I like to keep records: What movie did I watch? What book did I read? What play did I attend? When did I meet somebody who becomes a part of my life? Really, almost anything.

Hello, my name is Aaron, and I am an information hoarder.

I keep (more than) my share of physical items too. I remain convinced that as soon as I toss something—no matter how long since I last used or even thought of it—within days, something will occur to make me regret doing so and proving my conviction correct.

Over the last several years, as my unshared personal space has continued to dwindle, I’ve gotten better at letting go of those things I likely no longer need. I used to keep several drawers worth of files. The ability to convert the physical to digital has helped, though not always.

I often obsess over my life’s data; accumulating the details just in case!!! Should I ever want to reference even the most ordinary unremarkable item, I can.

I used to describe my desire to see every movie released and sample every television series in a year as my “unattainable goals.” With the expansion of “content creation” (a phrase that makes me shudder) over the last decade, I have relinquished that aspiration due to its now complete impossibility

My more recent ambition has been to, in fact, memorialize every piece of media I consume. Actually, it’s not such a new idea. In 2012, I tried to accomplish this using a Tumblr, but I gave-up a little over halfway through December.

Earlier this year, I discussed my Instagram #MovieDiary, decision paralysis, and #36DaysofHoliFilms. I intended (deadly words, those) to follow the second “intro” post with reactions to and commentary on the individual films from my personal festival—expanding on my brief Instagram comments.

A sibling (or maybe cousin?) to the #MovieDiary would be my daily media consumption journal, a/k/a “Consumption Junction: Some Call It a Sickness”—offering a slight nod to Schoolhouse Rock—and in which I would track everything: Movies, television, and theater, obviously, but also music, podcasts, books, etc. Whatever I consumed, natch.

I haven’t made this happen yet, at least not in any public way, mostly due to my stubborn insistence to include podcasts, something that might be easier once I determine how to automate the process of memorializing them. And also ... Why? Why would I need—or even want—to take time out of my already overstuffed day to maintain such an endeavor.

Maybe, if I start doing it, I’ll figure it out? There’s probably only one way to know.