« Happy New Year: Once Upon a Time ... Rebooting a Decade With Year 1 | Main | Thirty-six Days of HoliFilms continued: But Why‽ » 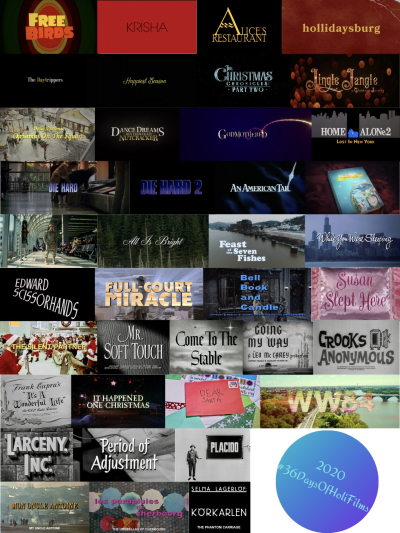 A couple years ago in late November, I decided to start a #MovieDiary with my Instagram feed. My (not original) idea was to capture the first onscreen image as well as the title card, combine them into a single mini-collage, and add a “brief” reaction in the comment.

I didn’t get very far.

This attempt during the Before Times, when visiting a movie theater didn’t carry potentially deadly risk. However, even then, I had realized that parenting little kids (two and four years old at the time) meant fewer visits to the theater and opportunities to binge media at home. So as December rolled around, I attempted to cure my frequent decision paralysis with a mostly pre-scheduled, monthlong festival of holiday movies—a/k/a HoliFilms™️—that I would track with my Instagram #MovieDiary.

The idea was simple: Watch one film related to the end-of-year holidays every day during December. With the exception of two annual mandatory viewings—It’s a Wonderful Life and The Apartment on Christmas and New Year’s Eves, respectively—my selection criteria remained straightforward: Holiday-related or -themed films, either new releases or new to me; or movies that I hadn’t seen in a long time.

In 2018, I made it two weeks before missing a day and adjusting my goal from one movie-per-day to 31 films by the end of the month. Ultimately, I missed that target too, but not as badly as I failed to keep-up with the Instagram posts. I watched 26 films but managed only eight posts. My posting fell behind quickly, and though I continued capturing screenshots in theaters and at home, I never caught-up, eventually choosing instead to move-on.

Determined to do better in 2019, I naturally complicated my criteria. Aside from the two aforementioned constants, I would not include any titles from my 2018 attempt, and if I chose a film not new-to-me, I had to have watched it last over 15 years before.

Why 15? I don’t remember, but an educated (and self-aware) supposition deduces that I wanted to watch Love, Actually in order to see if my late-40s self—older, more-sentimental—would hate it as much as I had upon its 2003 release. (Spoiler: I did.)

By Dec. 6, I had already missed a day, so the plan quickly returned to 31-for-31. And you know what? I came soooooo close, watching 30 holiday-theme films before the ball dropped in Times Square.

But again, though I have a whole collection of screenshots for nearly all 30 of those films, creating the posts—more specifically, writing my thoughts—felt impossible, and not a single film made it to Instagram, Twitter, Facebook, this blog, or anywhere else.

Leading up to the end of November 2020, I had watched fewer films and less television—new or old—than I had in since I was a teenager. As I had never made a conscious choice to reduce my media consumption, rather than offering any form of solace, my FOMO induced anxiety, and really, I have enough of that already.

Though my now four- and six-year-old children consume much of my time and attention—a reality magnified exponentially by the end of March—I can’t legitimately blame them for my lack of video media intake. Rather, the intensity of that previously described decision paralysis grew.

I regularly spent an hour (or more) browsing all my services for something I thought might match my mood and/or attention span. More often than I can count, I would settle on nothing; or I might find myself glued to no-new-news on MSNBC or CNN while doom scrolling Twitter/Facebook/Instagram/etc or imagining that I could achieve Inbox Zero for the day without simply deleting and unsubscribing from everything.

So what better way to solve my indecisiveness than to take the day-to-day choice out of my hands? With Thanksgiving approaching, I thought I’d start early. Why not? If I’ve never completed 31 films, much less one per day for 31 days, why not increase that total to 36, i.e., the number of days from Thanksgiving Thursday through New Year’s Eve? It’s just common (non)sense!

Plus, because I seek perfection in all things including procrastination, and my finally diagnosed ADD and never-confirmed OCD crave form and structure, I also naturally invested several hours creating a personal HoliFilms festival. During that process, I also chose to group films by some identifiable (even if minimal) common element, which in turn would help me determine a schedule to follow.

Then, on Dec. 1, I began this post. I planned to preview this project, thereby allowing me to avoid explaining all these details on Instagram. As I progressed through the month, I could return to this space to expand on any themes and/or discuss individual films.

A funny thing happened on the way to throwing the switch bringing to life these thoughts beyond the synapses in my grey matter; something unlike the dozens of unfinished (and usually abandoned) collections of words composed (especially throughout the 2010s) for this space: After allowing it to accumulate its own thin film of digital dust, I returned to finish it! More importantly, I also already have completed the other elements of this endeavor ... well, almost!

Currently (as this post’s publication), 33-of-39 entries live within my Instagram feed. Every movie I watched on and between Thanksgiving and Christmas Days have entries is there. And I will post my comments for the final six films I watched by the end of the week.

Yes, the period between Thanksgiving and New Year’s accounts for just 36 days, not 39; and yes, I named this undertaking “#36DaysOfHoliFilms”; and yes, I failed to make my viewing quota during two previous attempts. Yet, I managed to cap 2020 by landing on the other side of my target: I ultimately watched and included 39 films.

If you’ve made it this far and still wonder, “But why‽” I have a simple, introductory response: “Fair question.”

But that answer must wait—along with more details and entires related to #36DaysOfHoliFilms— for another day.