I WROTE THE PREVIOUS POST TOO SOON: R.I.P. BILL 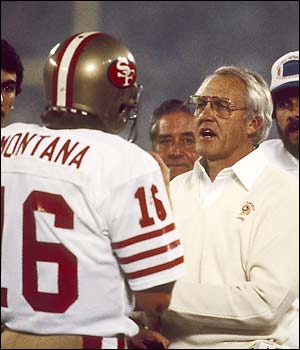 Wow. And now, just after finishing that post below, I read the news about Bill Walsh dying at 75, also after a long battle with Leukemia. For those of you non-sports fans, out of all these men who've passed away in the last 48 hours, Walsh, actually, probably had the biggest impact on me for in 1982 when the Dwight Clark made "The Catch" and Joe Montana led the San Francisco 49ers over the Cincinnati Bengals to win Super Bowl XVI and launch a football dynasty, it was because of the man who soon became known as "The Genius" -- coach Bill Walsh. I was 10 years old and a San Francisco sports fanatic in January 1982. I had suffered my early years as a sports fan (let's say, the previous 3-4, since I remember going to my first baseball game at 6) with a pretty bad Giants team and an even worse 49er team. But throughout my teens and college years, the Niners made up for all of that, winning five super bowls over the next 14 years. And even though Walsh was directly responsible for only three of them (although, many might argue four). he was the reason that the 49ers became a team with a winning tradition. (Yes, fine: he and the then-owner Eddie Debartolo who was free-spending in a football era that didn't really know as much of free-spending.)

Walsh drafted Montana in the third round when everyone else had passed him over. Walsh drafted Jerry Rice by trading up for the 16th pick in the 1985 draft, taking him from a tiny, nobody-pays-attention-to-it college, and making one of the best picks in NFL history. Walsh started a secondary in 1981 with three rookies -- Ronnie Lott, Eric Wright and Carlton Williamson -- that still managed to be one of the strongest defensive backfields in the league and was directly responsible for that 13-3 season and first Super Bowl win. He traded for quarterback Steve Young when he was becoming nothing more than a USFL and Tampa Bay cast-off, only to help turn him into the Super Bowl MVP and Hall-of-Famer he later became. Walsh's legacy spread throughout the NFL as many of his assistant coaches went on to become Super Bowl winning coaches themselves and his creation of the "West Coast Offense" featuring short dropbacks, quick dump-offs, multiple options and a set number of repeated plays with multiple variations.

Oh sure, Walsh was often granted with hosannas filled with hyperbole. "The Genius" alone was a bit much of a nickname. But as much as Montana or Rice or any number of other 49er players through history, every head coach from the early-'90s on has been compared -- and usually lost out in said comparisons -- to Walsh.

Yeah, some people are often surprised when I suddenly start talking sports, but the Giants and 49ers have been important and major parts of my life since I was a little boy. They both give me a sense of always being linked to San Francisco: I watch Giants games on my computer and I often go to sports bars to catch the Niners, even during these past several crappy losing seasons.

Bill Walsh is a football icon who was directly responsible for giving me some of my happiest childhood and teenage memories filled with freezing nights at the 'Stick, tailgating on warm days in the parking lot, and knowing that almost any game I went to, the Niners were going to win. (Of course, with that said, my record of attending playoff games was not a positive one for my team. I was at a devastating ass-whooping courtesy of the Vikings one year.)

Thanks Bill. I met you once when I was a little boy, but I never knew you. But thanks. And R.I.P.