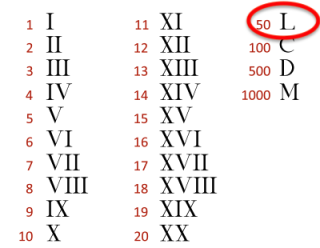 Why have Roman numerals endured, maintaining a hallowed (if not necessarily useful) place in Western culture?

Better: How many people read that sentence and either ignore it or answer, “No idea,” and don’t think twice about it; versus my predilection to flashback to a MCMXC’s Arsenio Hall-bit that infiltrated pop culture enough to inspire a C+C Music Factory hit single.

Like most of my curiosities, this question did not spontaneously emerge from a vacuum. Less commonly, I managed to stop my rabbit-hole deep-dive before my feet left the ground, though only after falling down the neighboring pit searching for why “L” equals “50.”

I won’t follow that tangent; suffice it to say, none of the numerals that seem to have developed intuitively due to Latin words like “centum” or “mille.”

Naturally, this curiosity resulted from the new ME year celebrated today by my personal Gregorian calendar: As of II:LVI am Pacific Daylight Time, I passed from XLIX to L. 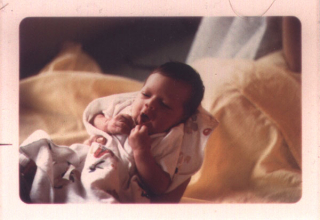 But back to the initial question, because the endurance of Roman numerals for over MM years, long beyond performing any practical, non-decorative function fascinates me. As I approached L, and as people have offered both well-wishes and congratulations, I began considering my own presence, perseverance, and fortitude (whatever they may be), and the representative nature of this blog’s staying power as opposed to simply fading away along with its activity level and relevancy.

I’ve always enjoyed Roman numerals. They’re little more than pretty to look at, but I suppose they provide a weightiness; a kind of numerical bolding, even? I remember II decades ago thinking one of the more monumental changeovers at the turn of the millennium and century was watching MCMXCIX in favor for the larger but more compact MM.

Super Bowls; copyright dates for films, TV, and books; clock faces; building cornerstones and historical plaques: What else regularly utilizes Roman numerals? And still, I’m pretty sure I learned the III most basic—I, V, X—along with, if not before, our standard (Arabic) number system.

For nearly a decade, these birthday posts were the only consistent element of this space, and I used them primarily to note the many interesting people who share(d) my birthday. That annual tradition became irregular and infrequent during the MMX's, even more so since I have II or III birthday posts that I drafted but never published.

My adherence to the birthday post has been its own thing-to-make-me-say-hmmmm. As I noted previously, I have not always enjoyed celebrating my birthday; sometimes, I don’t even want to acknowledge it. I get too self-conscious. I question the motivations of people who disappear from my life before reaching out on that single day with a brief kind (and generic?) word. I contemplate my relationships with those who forget (or don’t care enough to remember?) that it’s my birthday.

So why have I always called greater attention to it in this space? Once again, the contradictory nature of my every feeling reigns supreme. In other words:

I don’t want to be the center of attention; how dare you ignore me!

I would be remiss if I didn’t wish a happy Lth to my birthDATE buddies—Luke Wilson and Alfonso Ribeiro—but otherwise, this year I choose to focus on the some of the various media that entered and/or achieved some cultural significance on-or-around Sept. XXI, MCMLXXI.

For instance, we recently got a new car which came with a IV-month trial subscription to SiriusXM, and on our first long weekend drive, I discovered that the “LXXs on VII” channel reruns American Top XL with Casey Kasem, generally picking that Saturday’s or Sunday’s date from a corresponding year between MCMLXX-MCMLXXIX.

So when I started looking at what command the cultural conversations at the moment I began my true domination of my parents’ lives, I wondered what held the top spot on the Billboard Hot C was when I was born.

MISCELLANEOUS MISCELLANY: RAIN RAIN GO AWAY AND OTHER THOUGHTS FOR A FRI-DAY (GET IT? ... SORRY)

In the spirit of posting regularly, earlier today while at work, I had a slew of things I was going to throw up here in the midst of several job-related activities. And then, our network went down. And then it came back up ... for about 30 seconds before going back down. Eventually, I just decided it made more sense to skip the post and go to a movie. Duh!

Oh yeah ... I need to move. By the end of September, but I'm shooting for beginning of September. I need to live alone again, and preferably in a building where the landlord responds to things like a collapsing ceiling because of a leak in the pipes from the apartment above in less than five days, thereby stopping the paint and plaster from actually bursting. But more importantly ... I just need to live alone again. Send tips my way if you know of any.

AN EARLY WEEKEND TO-DO SUGGESTION: GET THEE TO GREY GARDENS 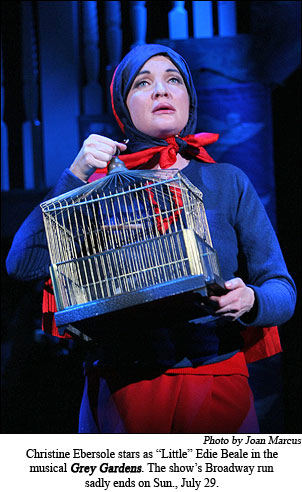 My weekend seems to be overflowing with music rather than movies or theater: Friday night is Robbers on High Street at Bowery; Saturday is the Sonic Youth plays "Daydream Nation" show in Williamsburg; and Sunday, it's back to McCarren Pool for TV on the Radio. At least, that's the plan. Purchased tix for the first two, so those are the only guarantees.

But never mind my plans: I want to tell you what yours should be. This Sunday, Grey Gardens: The Musical will play its last performance on Broadway, and that's just a crying shame. If you're familiar with the classic 1975 Maysles Brothers documentary about Edie Bouvier Beale and her daughter "Little" Edie living in a majestic but decrepit Hamptons mansion, you will likely appreciate the care and imagination the entire creative team put into adapting a fascinating but narratively formless film into a wonderful two-act piece of musical theatre. If you've never seen the film, first of all ... you should. But secondly, you probably will love the show even more because you won't be comparing it at all.

Yes, the show has received most of its notice because of the central performances by Christine Ebersole and Mary Louise Wilson, both of whom won Tonys this summer, and both wins richly deserved. Ebersole, in particular, gives one of the most amazing performances I've ever seen on the stage, and the number she has regularly performed in public ("The Revolutionary Costume For Today." which she did on the Tonys and I've heard in other places) doesn't truly alone represent exactly how great she is. What is so marvelous about Ebersole is the dramatic transformation she goes through between acts. In case you don't know, the first act of the musical doesn't come from the film at all. It's an imagined day at Grey Gardens back when the Beales were still grand members of society, and "Little" Edie is portrayed as a co-ed all set to marry into the Kennedy family -- beating her cousin Jacqueline Bouvier to the punch. In this act, Ebersole plays "Big" Edie before the fall, as it were. In the second act, the curtain rises on the Grey Gardens we know from the film and Ebersole is now an adult "Little" Edie (while Wilson plays the aged "Big" Edie).

So really how good is Ebersole? Let's just say, it's almost hard to recognize and believe that she is playing both parts, even with the amazing physical resemblance. It's not just two different performances; it's like there are two different actresses, and each of them brilliant.

But the show itself is thoroughly enjoyable, interesting and well-produced beyond the performances. The sets are wonderful, and real footage from the film is imaginatively integrated through projections during act 2.

Grey Gardens has been available at the TKTS booth every time I've been by there over the past couple weeks. Since the producers made a quick turnaround from talking about the continuing run to deciding the show would close this weekend (without recouping its investment), chances are, tickets aren't hard to come by and will still be available for 50% the day of at TKTS. There are only four chances left (tonight, tomorrow, two shows on Saturday, and Sunday matinee), so if you have the chance and haven't yet been, go.