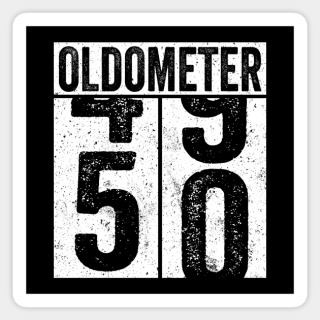 I was born in San Francisco 50 years ago tomorrow, and for the last several months when anyone has asked me that most terrible of conversation starters—“How are you?”—I have replied with some variable of the following:

“Hopefully, reaching the end of this 25-year midlife crisis.”

As my few most-recent attempts to resurrect this digital space demonstrate, much of my contemporary focus involves self-reflection. Because my constant curiosity seems to prefer the ever deepening meta-analysis best represented by Russian Nesting Dolls, I have also spent an inordinate amount of time considering the blurry purgatory separating healthy self-examination and narcissistic navel-gazing.

I wish my identifying a “mid-life crisis” was new, but no matter how little I have visited this space over the past decade, it appears that I left evidence of playtime in a similar mental sandbox just nine years ago:

Recently, more than usual, I have felt further away from myself, the things I enjoy, and the Aaron I know I am and have always been. A mid-life crisis. A journey of self-discovery. A bunch of blathering nonsense. Any and all of these. I’m hoping as I focus more on my writing – whether here, elsewhere or a combination of the two – that the answers will become more apparent to me.

“Hoping.” An ongoing story of inaction overshadowed by the busy-ness of any given moment; a trait that ever-present in my fear-center, but not one that resembles the “Aaron” I have always believed myself to be and often proven true to others as well. And yet, as nine years flew by, I too often neglected my aspirational child, allowing that that passive story to take roots and experience compound growth.

I wrote that 2012 birthday post and its excerpted passage less than six weeks after getting married; barely over 18 months before becoming a first-time parent; just four years shy of the three-month window during which I joyfully welcomed a second child before painfully saying goodbye to my dad.

And now, nine years later, on the eve of the conclusion of my first half-century, I ponder how much has changed, all that hasn’t, and where I am in life—personally, professionally, financially, socially, emotionally—as I turn older than either of my grandmothers were when I was born, and frequently, I feel more lost and confused than ever.

Of course, nine years ago, I looked ahead at a path that I have yet to follow in anything more than brief, occasional, irregular spurts.

More recently, I wondered how to edit or rewrite my story if I treat “midlife” literally; if I consider my truth-masked-as-humor answer to “How are you?” as descriptive, precisely where would I insert it within my three-act structure?

The “middle-of-my-life”? 25 years? The entire middle? Or just part of it? Have I reached the end of that second act mesa, preparing to begin the long descent, without brakes, traveling faster with each fleeting second.

OR, I could pursue a more optimistic storyline: Screenwriting gurus charlatans have different names for that central moment in the story where simple turns challenging or difficulties result in breakthroughs. “The Midpoint” is one common name for that crucial pivot point, placed in the middle of that second act, which actually contains the bulk of any story—half of it if not more, rather than just a proportional third.

That makes more sense for life too, right? During our first acts—infancy, childhood, adolescent, young adulthood—we develop and grow, hopefully determining the direction we want each of our stories to go. Then comes the long and most interesting (one hopes) second act, during which we establish ourselves in that story and the larger world, face challenges on the way to proficiency and expertise, develop relationships with others, and as time passes, hopefully determine the transition that leads to a satisfying conclusion in Act three.

For many of us, that might mean that Act 1 ends upon finishing school and beginning a career; Act 2 comprises successes and failures in that career as well as with our social and/or familial relationships, all represented with some major identifiable turning point somewhere in the middle; all leading into Act 3, with, if we’re lucky, some sort of relaxed and/or retired existence until the story ends.

I guess it’s the one I’d like to model, even though my nature fights against it, because as I turn 50, very little resembles the path I foresaw or the story I believed I was writing when I was 25. I’d much prefer my 25-year midlife crisis conclude at a “midpoint” rather than a third-act transition, and the only feeling of certainty as I move through this moment in time, is that it will be one or the other.

In just over a month, I will mark another “birthday” of sorts: 25 years as a resident of New York City. I have and will always consider myself a San Franciscan, and yet, I will have lived in New York over half my life, and obviously longer than in either San Francisco (17 years) or Los Angeles (8 years). I believe I always saw my cross-country move as the start of my second act, and I know I anticipated a promising future. Still, I probably too often selected the less optimal next page in my “Choose Your Own Adventure” story.

Naturally, whether I push against or forcefully through the thin scrim between useful self-examination and counter-productive self-absorption, I inevitably start thinking about one of my all-time favorite films, Charlie Kaufman’s Synecdoche, New York. I haven’t actually watched it in many years, and as this collection of words has coalesced, I have realized it’s about time I revisit it. It feels extra-relevant as I face 50.

Thinking about Synecdoche, New York prompted me to wonder what—aside from love and awe—I thought and felt about it after walking out of the screening room following my staggering first viewing 13 years ago. Luckily (and somewhat surprisingly), I actually wrote about it.

Rereading my open letter to Charlie Kaufman offered its own unanticipated and powerful experience beyond any I could have intended when I quickly (I’d bet) put those thoughts into words and onto this blog. I called it “A Reaction, Not Yet a Review,” and now reflecting upon my past reflection could also count as too self-indulgent—certainly the commenter who suggested that I, “”Get over yourself, and most importantly, get a hold of yourself,” because, “It’s only a movie,” thought so back then.

Considering how often my film-related experiences have induced both “Uh-huh” and “A-HA” moments, scrutinizing how the film spoke to me, the reaction it stimulated, and the self-realizations it proffered at that moment in time—roughly halfway between my move to New York and the present, I must note—seems appropriate, especially since my experience of and reaction to the Kaufman’s film—along with my serendipitous attendance at two other theatrical productions that weekend—feels like a more profound episode in my story than I ever realized.

I guess the barrier between self-reflection and self-indulgence reveals itself only after discovering the results of the process: Positive change thanks to lessons learned seems a better path than continuing (and likely never-ending) curiosity that does little else than uncover the next nesting doll.

I know that I have and continue to somewhat indiscriminately amble down both paths; I always liked rereading those “Choose Your Own Adventure” books and selecting different options. I love experiencing/watching/reading/studying different takes on the same story.

But as I face 50, I fear that my incessant curiosity and insatiable thirst for the new and the next are now luxuries because whether one considers 50 the new 40 (or even 30) or simply the age at which one officially becomes part of the AARP demographic, the likelihood is that most of my story is behind me, and if I have yet to find it satisfying enough, I really need to get to work.

My main personal email is still down. This has been the case since at least 1 PM on Friday. Apple's MobileMe was down for "scheduled maintenance" last night, and now they have a lovely announcement on their support page saying, "MobileMe is now available!" No it isn't assholes! Not to those of us that are still part of the group you mention right above that: "1% of MobileMe members cannot access MobileMe Mail. We apologize for any inconvenience."

That message hasn't changed in two days. No updates. No explanations. No nothing. As I mentioned yesterday, I sent an email to the New York Times' David Pogue. He actually sent me a brief response last night: "Yep, this rollout was a real disaster, for sure. Sorry to hear it's causing you grief! Here's hoping they get it worked out quickly!" I've never been so disappointed in Apple. I've also never more seriously considered dropping my Mac.com-now-MobileMe membership service.

At least today ... fuck you Apple!

Apple Pissing Me Off: In Pogue We Hope?

Have any of you had troubles with your mac.com transitions to MobileMe? I hadn't until yesterday when suddenly my mac.com email address -- my main personal email -- stopped working. Utterly, completely and totally stopped working. I received my last email at 12:31 PM. I sent a reply shortly after, and ever since, whether through my Mail application on my computer or through MobileMe on the web or my Blackberry ... nada.

Seems that a "lucky" 1% of MobileMe users are having this problem. The discussion boards on the Apple support site are going wild. Apple, meanwhile, is being silent. The entire MobileMe transition has been, it seems, a bit of a clusterfuck, and the other day, Apple sent out emails to all their users stating that everyone was receiving an extra month's membership for free as an apology. That was nice, especially since I hadn't yet to notice any major problems, but I also don't have an iPhone and wasn't yet attempting to use any of MobileMe's lauded syncing and/or push technology. And then, most suddenly, no email. Today, I finally tried to get some chat support from Apple to find out what was happening and when I might expect email to be restored. After waiting for well-over an hour, I finally was connected to a representative who essentially couldn't tell me anything.

On one of the Apple discussion boards, I noticed someone mentioning that he had written to David Pogue, technology writer for the New York Times. I figured: Why not? I'm going to write him too; share my story, my aggravation, and most importantly, my disappointment in Apple, a company I have been faithful to and appreciative of since spending all of my Bar Mitzvah money (well over $3,000 in 1984!) on a first gen 128K Macintosh, an extra external disk drive (not hard disk, mind you), and an ImageWriter dotmatrix printer. I still will take Mac over Windows any day, but the way they're handling this pretty major problem right now is extremely disappointing and leading to a lot of anger among the masses.

My email to Pogue after the jump:

Continue reading "Apple Pissing Me Off: In Pogue We Hope?" »