Recently, I ran across this passage while reading the UCLA Daily Bruin:

We are in trouble. Serious trouble.

Our nation, built on the foundation of justice, liberty and freedom for all, is now being threatened by a new enemy. An enemy that instills fear into the hearts of women; an enemy that yearns to take the power out of the hands of the people; an enemy that feeds on the unfortunate, preys on the oppressed and relishes on the helpless.

There might not be any cure for this monster. Why, you may ask? Simple, because we created it. The enemy is not a human — it's the Supreme Court. If you find yourself on the left side of the political divide, nothing about the above seems so surprising, especially coming from an undergraduate at a University of California school. However, it lacks one crucial contextual detail that might only be obvious to current or recent members of the UCLA community who know that the Bruin no longer calls its "Opinion" section "Viewpoint," nor its summer-term weekly issues the "Summer Bruin."

One must travel 30+ years into the past and search the Daily Bruin print archives to look at the .pdf of the reel of microfilm images that make up the summer 1991 volume of the print-only Summer Bruin, and then find the August 22, 1991 issue. No direct link to this (or any other contemporaneous) issue exists of "the paper," which was solely a physical item—actual newsprint. Nor can you find a link to this individual column. The above linked archive site hasn't always worked for me, but you can access the correct pdf here and scroll to p. 184 to find it under the headline "The Supreme Court's potential Prince of Darkness." (Or, just scroll down a bit. You're welcome.) 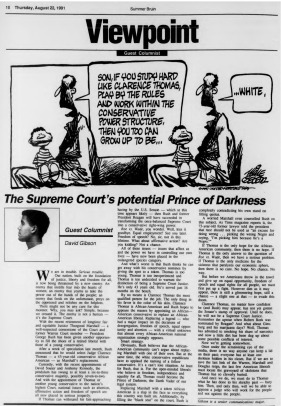 That headline offers another clue that Gibson's subject wasn't the current debate over the legitimacy (or lack) of the Supreme Court, the overturning of Rowe, nor anything relating to the-president-who-shall-not-be-named. (Though, "Prince of Darkness" confuses that last bit.) Rather, then-student Gibson was writing about the nomination of yup-still-in-his-job-and-bringing-darkness-to-the-bench-30-years-later Clarence Thomas!

Why was I scouring virtually unsearchable, three-plus-decades-old issues of a college newspaper, you ask? It's for another of my long list of will-I-ever-actually-do-this-interesting-idea projects. This one required that I revisit everything—though primarily the movie reviews—I wrote for the Daily Bruin.

Yes, trawling through more than two years worth of enormous, often slow-to-render .pdf files so I could read 20-year-old Me's opining was, and continues to be, an arguably masochistic and often tedious exercise. And yet, browsing the stories, opinions, and topics that dominated both the local and global conversation in from late 1990 through early 1993 proved revelatory and provided a staggering "Uh-huh Moment."

I can imagine a college student in 2020—or at multiple other moments over the past decade ... or more—writing those same paragraphs because our conversations haven't changed. Sure, progress has been made in some areas, and the scope of certain issues have broadened to become more inclusive, but as I revisited the early 1990s in Los Angeles, nearly every subject that dominated the political, social, and cultural conversations then continue today. The times, they may still be a a'changing, but our debates don't. They simply provide additional evidence for Martin Luther King Jr.'s (or was it Theodore Parker's creation?), famous quote, "The arc of the moral universe is long but it bends toward justice," which President Obama regularly adapted for his 2009 election night speech: "It's the answer that led those who have been told for so long by so many to be cynical, and fearful, and doubtful of what we can achieve to put their hands on the arc of history and bend it once more toward the hope of a better day." Even when minimal progress is occasionally made, the conversations remain largely the same.

Considering the manner of three-of-the-four most recent justice's ascension to the Supreme Court, Thomas's nomination offers a solid starting point, though it is far from the only example. It's worth offering some context around Thomas's nomination, especially for those people who learned about 9/11 in a similar way as I understood Vietnam, the Kennedy assassination, and Pearl Harbor.

Though many members of the GOP constantly whine about "identity politics," they sure love to play that game, such as when President George H. W. Bush nominated Thomas to fill the seat of the recently retired Thurgood Marshall, the Court's first—and until this summer, still only other—African-American Justice.

And since history enjoys taking laps, the parallels between Amy Coney Barrett's installation to Ruth Bader Ginsberg's chair seems unfortunately appropriate. But it's hardly surprising, especially existing in the shadow of Mitch McConnell's despicable duplicity and other machinations that enabled it.

The only person more pious than McConnell, obviously, was Trump himself, so nobody should be surprised that he followed the appropriate scripture: An eye for an eye, a woman for a woman!

Trump had almost nominated Barrette to replace Justice Anthony Kennedy, but I suppose they wanted to get another sexual harasser on the bench, so it became Brett Kavanaugh's turn. Even two years later, people still decry Ginsberg for not retiring before President Obama had left office, and before her death, she bristled at any question of her responsibility to do so.

It's also worth noting that Gibson's piece was published before the Thomas's Senate hearings had even begun. He wasn't waiting for some rushed, last-minute, vote happening two days after the nomination got out of committee. The hearings began on Sept. 10, 1991. Less than three weeks prior when the Bruin published this piece, the embryo of the contemporary #MeToo movement had hardly been conceived: The name "Anita Hill" was not yet broadly known; her allegations not yet known, and her riveting testimony unimaginable. 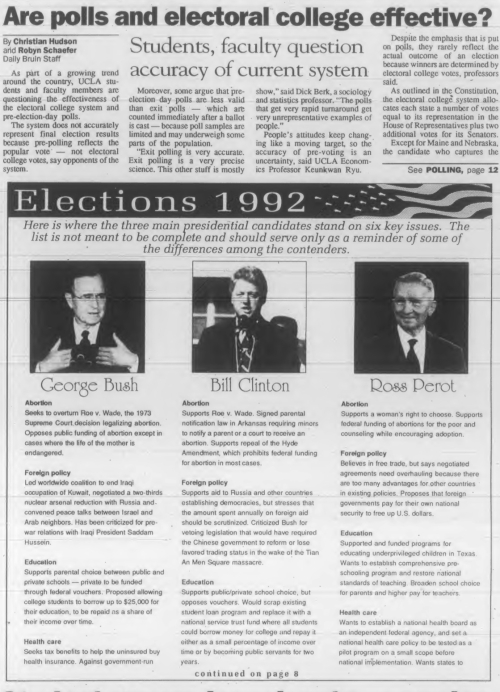 So what was going on in the United States of America in 1991 and 1992? What kinds of stories and opinion pieces dominated the pages of the Daily Bruin during that time?

This is not an exhaustive list, nor does it contain many (most?) of the nuances that offer both similarities and differences between these two eras. But the simple fact that the debates and conversations continue, and frequently do so with all sides making the same mistakes, feels quite depressing.

Or, maybe it's all just more of my perceived compression of time, as I alluded to my last post. In fact, everything above began as a continuation of those thoughts, spun-off on its own in an effort to somewhat confine my occasionally fun but frequently irritating alter-ego.

"The definition of insanity is doing the same thing over and over again and expecting a different result," is often misattributed to Albert Einstein, but probably only because it is a statement of pure genius. The world is insane, so no wonder we're all just shouting at windmills, repeating the same arguments with each other.