« The (still-not-quite) daily check-in: A journey in search of self-compassion | Main | Digitally Dusting-off a Decade of Unfinished Thoughts » 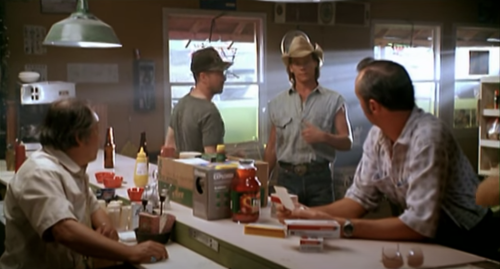 TREMORS: "We plan ahead, that way, we don't do anything right now."

A “Doer?” Sure. For years, decades even, I was a “Doer.” And even when I fell short of “Doing,” I drew from a war chest of great excuses, thereby allowing myself to retain that “Doer” mantle.

And yet, just over a month before I complete my 50th trip around the sun (WTF‽), the documentary of my life muddles that description. All the excuses fall flat as I recognize fewer tomorrows ahead. Suddenly—or maybe not so?— I find myself experiencing a challenging internal reconciliation, one made more difficult due to my ongoing need for a clearer external harmony as well.

I realize that’s vague; enigmatic even, and not necessarily in a fun way. And yet, it provides a decent enough representation of my current thought process, so ... I’m gonna go with it.

Two of my three brothers got married in California this summer, and so in June as well as earlier this month, I traveled west to attend. I went alone due to both COVID and cost.

As I have likely mentioned here before, I grew-up an only child, but I have three (much) younger brothers from my fathers second marriage, which occurred when I was 13. I never lived in the same city as the three of them, much less the same household.

These trips, coming on the heels of the beginning of our return to normalcy mixed with our lunge back into “Woah woah woah, have you met my not-so-distant cousin Delta,” all naturally coinciding with a monumental and unbelievable approaching birthday has been, to quote Marty McFly, “Heavy!”

I often write, “I find myself,” a fascinating phrase that at its core removes all personal agency, doesn’t it? As if I’m just floating along through life, and ... “Oh! Look where I landed!” My consciousness contains an eternal battle between Yin/Yang-like polar opposites, a Battle Royale between the intellectual and emotional , with the latter often saying to the former, “Fuck you! I know you know what I’m doing, and I could not care less. You dominated way too long. My turn!”

And so now, here I am. I started this post three days ago. I’ll return to what took so long, but as I go through it for the last time before clicking “Publish,” this three-times-as-long-as-it-could-have-been process distills the larger them of what follows perfectly. At least ... it does for me. If you’re not in my head, you might need to keep going. (If you are in my head, the rent is long overdue!)

I have struggled for weeks—months even (years arguably)—around what to do with this online space. My desire to write too often remains a hovering threat rather than any activation of that infinitive into, “I write.” That much should be evident simply by scanning the last decade-and-a-half of posts.

I plan so many things: Commentary, if not necessarily criticism, of film, TV, theater, podcasts, and all media; political-oriented responses to all those things that seem obvious to me, but I don’t hear others discuss; personal exploration, i.e., the “diary” that I never intended this site to become but more often than not through my 40s it has represented.

For the past two years, I have planned a total reboot of this site, one to better categorize my work, making it easier to navigate, prettier to look at, living in a corner of the Interwebs that shouldn’t be relegated to (primarily) The Wayback Machine. I even created a “chip-away” project to do so, in which I would spend a limited, bit-size amount of time each day so the task didn’t feel so enormous. I told myself, “This year, for sure.” As we shot past the halfway mark of 2021, I continued telling myself that.

COVID-19 has provided everyone with magnificent and legitimate excuses for how the past 17 months have not proceeded according to plans, but the compassion I have tried to offer myself around this extremely challenging period feels much less earned. Sure, I have two young children, and we live in too-expensive Brooklyn, but my wife remains the sole breadwinner as she has been for the majority of our 11-plus year relationship.

Once upon I time, I executed constantly. Maybe I wouldn’t complete everything to my desired result (read: idealized perfection), but I would complete them, even if that meant a nonstop, frantic rush at the last minute. At least, the things I cared about and wanted to finish, those would reach some sort of conclusion, and I could move on to the next.

Or ... that’s what I always told myself.

I could write tens-of-thousands of words examining this behavior.

Do you trust that I will? I mean ... I don’t. I am neither confident, committed, nor sure that I want to; nor certain that I should. What an awful word, “should,” one that I hesitate to use because of its roughly life-long destructive impact on me.

But I want to be back here. I want to return to the original 100,000-foot intent of this site, namely, offering myself an opportunity to get out of my head, by flinging words onto the page; by taking my never-ending ideas and opinions and throwing them into the world, for others to read (or not); maybe even respond (or not). Showing-up in public was always the goal, even when just an unconscious one; creating a confident presence in both the real and virtual worlds and arguing that I have something valuable to say, and hopefully, useful or at worst interesting to someone else.

Sitting down, facing the screen—whether blank or already full of words—becomes harder for me each day. “Why?” has become a persistent question; arguably, too persistent. I am too curious. I care too much about that “Why?” I love and appreciate curiosity, and I feel too many people aren’t curious enough, certainly about the world around them, but maybe even mores about themselves.

And yet, I now connect to the old proverb more than ever. Frankly, as a dog-lover/cat-hater, I never minded Curiosity’s homicidal tendency. Of course, such glibness creates a beautiful barrier against fully considering the metaphor. You see, now I simultaneously recognize how the search to answer “Why?” regularly blocks me from finishing just about anything, if not actually everything. I suppose I’m learning how to become more selective in my curiosity around all those “Why?”s, so that fewer of them will hijack my attention and drive me down tangential pathways, further from any specific, determinate goals.

See, even that intro became a winding path to this post’s original intent: Examining what I’ve left unfinished, and in many cases, not even started, particularly related to this 17-year-old blog that contains fewer than 900 entires. But during this process occupying several hours over the past three days, something else came out.

I think it’s valuable, at least to me. So I’m going to leave it here, and that should make it far easier for me to return tomorrow.