« Shirley Jackson’s “The Lottery” and MAGA Mentality | Main | Writing about not writing: Creating a conclusion to a never-ending Series »

We Live in a Country ...: Reflections on a Nation and Inauguration 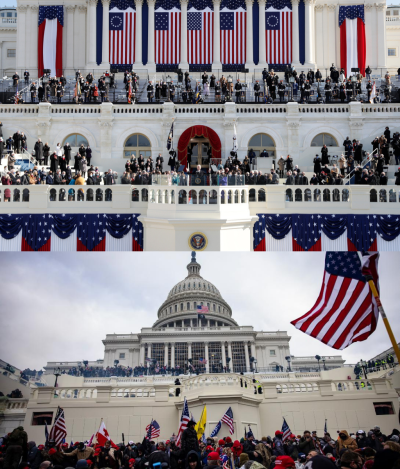 It’s already been a week!

It’s only been a week‽

One week ago from the moment this post went live, only watching a clock would have let you know anything was different, and yet everything had changed with President Biden’s inauguration and the semi-peaceful transfer of power.

Through the windows of my Brooklyn living room, I saw blue skies. On my TV, I noticed the same in Washington D.C. Earlier, as I sat to write my morning pages, an unexpected heavy flurry swirled outside; after, when I closed myself in the kids’ bedroom to meditate, the snow had stopped, but outside appeared cold and gloomy, remaining overcast and gray.

Though I did not record changes in weather in order to compare them to the timeline of He-Who-Shall-No-Longer-Be-Named’s departure from the White House for his final flight on Air Force One, it seemed to me that the further he traveled physically from our government’s seat of power, Mother Nature began to relax. By the time he landed in Florida and deplaned, that blue sky had peaked through, and Kamala Harris was minutes from taking the oath that allowed her to drop “-elect” from her new job title. And by the time our Mini-Wannabe-Mussolini and Melania parted ways to go to their separate bedrooms inside Mar-a-Lago, only the winter coats and accessories (most notably some giant mittens!) revealed the season. The temperature in D.C. at noon reached 42 degrees, right around the average high temperature for the date.

As high noon approached, President Uncle Joe took the oath-of-office at 11:47 am, standing on the same platform that just two weeks earlier hundreds of abhorrent, anti-constitutional, anti-patriotic, apparently ProFa (read: Pro Fascist) insurrectionists had defiled just two weeks earlier. Meanwhile, from my personal view in Brooklyn and the televised one from D.C., though clouds remained, the day now appeared bright and sunny, and I appreciated the fortuitous synchronicity of between our leadership and the weather.

I wondered: Going forward, maybe we could just skip “45” in the presidential count. I mean, there actually have only been 44 people to hold the office; Grover Cleveland’s non-consecutive terms make him both 22 and 24. So why not treat Mr. 45 like so many buildings consider their 13th floors: Technically, within the unforgiving universe of numbers, it exists, but too many people feel better not seeing “13” on the elevator display or buttons, we accept its absence and pretend the 14th floor isn’t ... well, you know.

Listening to Biden’s speech, as the morning became the afternoon, as I’ve heard so many others express, I suddenly felt a little bit more relaxed. Certainly, I’m conscious that a new president doesn’t automatically fix anything, much less everything, but in this case, at least my daily expectations had flipped upside down: The glass for our country and our world was now 50% full rather than 90+% empty.

I watched the entire ceremony with a sense of cleansing:

But when the ceremony was over, and I began scrolling through various social media—not doomscrolling, but only barely hopescrolling—I quickly remembered that even with all the positive feelings an sights I experienced and also witnessed in others from afar, we live in a country that does not live up to its full name, and arguably, it never has; or if it did, that pinnacle of states fully united has not been reality since May 29, 1790. We consider Sept. 17, 1787 “Constitution Day,” but that date was simply when the delegates to the Constitutional Convention from the 13 original states agreed to and signed the document. Though even that statement requires an asterisk, for no Rhode Island representative signed, and the state did not officially ratify the Constitution until ... May 29, 1790.

Do we live in a country that has simply outgrown its Constitution? Something that I believe most if not all our founders would have considered a long-term eventuality, hence the amendment process.

We do live in a country that I don’t believe any of the founders would have foreseen, nor would they recognize, even if they believed in “manifest destiny.”

We live in a country where everything is binary: either/or; with us/against us; friend/enemy; us/them.

We live in a country where ideology and individual belief too often eclipse common sense, reality and pragmatism.

We live in a country with grand ideals, never achieved because they most likely can’t be, at least not with human beings running things.

We live in a country where ideology and reality are rarely discussed in the same vicinity because reconciling the two doesn’t fit any current political conversatiuon.

We live in a country where our very structure exists due to the contextual realities of the time during which it was established, and yet that structure no longer works, nor will our leaders show the courage to use the system the Constitution provides to create a stronger foundation more appropriate to our modern actualities.

We live in a country where intellectuals and policy wonks who mean well keep pushing proposals that actually take the easy way out, putting gigantic bandages on problems, and building 10 enormous new stories made of steel and cement on top of a small shack constructed out of mud and wood.

We live in a country where people do not know—or at the very least, don’t understand—the nature of our government, it’s history, and how it actually works. Even worse, most people believe they do.

We live in a country where everyone judges the validity of everyone else’s grievances.

We live in a country where an apology or admission of error too often leads to ridicule, demonization, and ostracism, rather than a larger conversation that can lead to reconciliation; and on a psychological level, that necessary empathy often is absent from many people who complain about others not apologizing or admitting errors.

We live in a country where the loudest voices believe they can just write-off those who disagree with them and somehow bury them and their ideas, yet we fail to recognize that after humanity has tried that for millennia, it never actually works completely.

We live in a country that mistakes rhetoric for content.

We live in a country where we feel we take righteous actions (and maybe from some inhuman objective viewpoint, sometimes we do), but we don’t recognize how others can draw equivalency—even if false—from it for their own undertakings.

We live in a country of short memories and even shorter-term thinking, often masqueraded as long-term planning.

We live in a country that espouses and believes in rugged individualism for others and people like to shout, “Nobody gave me anything!” At least, until they need something they believe should be provided to them by the community.

We live in a country where both sides of the political divide consistently demonize the other with hyperbolic (and often false) arguments.

We live in a country where people debate intellectually about subjects that trigger individual emotions without recognizing such, a dynamic that makes any detente—let alone something more active or grand like reconciliation— utterly impossible.

We live in a country that does not recognize how much it has changed in ways other than those related to simple demographics of age, racial or gender identity, and other broad categories.

We live in a country where the modern political and social realities attempt an ongoing balancing act, with either side edging out the other to take control, claiming non-existent mandates, and determining that the other side will appreciate what’s been done once they benefit from it.

We live in a country where we argue the topline elements of every issue in order to create momentum for our team’s talking points, rather than actually determining the best way forward for all. (Thanks Twitter.)

We live in a country where the foundation of freedom and liberty are confused by the ideas “What about me?” or even “What about we?” when really the question should be, “How about you?”

We live in a country that uses math and statistics for rhetorical purposes frequently misunderstood because most of us don’t study, understand, or like math or statistics, leading to counterproductive and even destructive arguments and conclusions.

We live in a country with “evenly divided” opinions: 51% think one thing; 49% think the other; but we rarely connect that idea to the one of actual numbers, and which group is the majority seesaws continuously.

We live in a country where 150 million people seem to believe that the other 150 million aren’t going to be here seeking the very primal, human desire for revenge ... or is it justice? It’s in the eye of the beholder.

We live in a country where focus and consistency are conveniences, not practices.

But we live in a country where nobody pays attention to that idea long enough to actually follow its guidance.