(Wishing I could wish) Happy birthday Dad: An overdue memorial, first in a series? 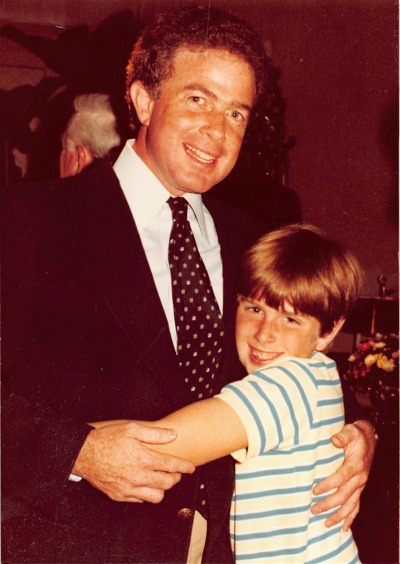 Seventy-six years ago today, Stephen Mark Dobbs was born in San Francisco. I write “Stephen Mark Dobbs” because my dad was a fan of using full names. If he mailed something to me, he inevitably addressed the envelope to “Aaron Marc Dobbs.” (Let’s not discuss the weird middle name thing right now, OK?)

My dad turning 76 makes no sense to me. How could it? I still haven’t fully absorbed that ...

OR ... by the time my dad celebrated his 48th birthday, I was 20 and completing (in a manner of speaking) my third year at UCLA, while he and my stepmother had converted me from an only child into the eldest (by far!) of his four sons.

OR ... my grandfather was only 75 in 1994 when he lost his battle with leukemia. How could my dad be older than his father?

OR ... that I no longer have a living father.

My dad didn’t make it to 74, much less 76, because on Oct. 25, 2016, he lost his own health battle. His never surpassing nor even reaching my grandfather's age does nothing to lessen this confusion.

I often describe my 1996 move to New York as something that took a long time to happen very quickly, and 20 years later, almost to the day, that also depicted my dad’s decline. Today, over 2 1/2 years later, I still struggle with his death, even more than I did when my youngest brother called to say he had died. The iconic opening of “A Tale of Two Cities” described my 2016 perfectly, with the presidential election only landing at number three on my personal tragedy chart. Just four months before my dad died, my wife’s aunt Evelyn--simply the kindest, most selfless and generous person you could ever meet--had lost her battle with cancer and also passed away.

Fortunately, those two heartbreaking events bookended the arrival of my son Elijah (named for Evelyn).

I miss my dad terribly. Or, I miss having a dad terribly. I still vacillate between the two, wondering if they are one and the same or, in fact, quite different. I suppose both are accurate, but on any given day, one feels stronger than the other.

Watching Elijah transform from newborn to infant to toddler to the crazy, wonderful, curious, hysterical almost-three-year-old (consistently ignoring my pleas to stop jumping on the couch) makes me miss my dad even more. My five-year-old daughter Ruby provides as much wonderment and awe as Elijah, but I did not identify with my dad observing her at 2 1/2 as I do now watching this little boy.

When I was 2 1/2, my father was a few months shy of 31. It’s hard to imagine myself at 31 with a baby, so I see myself in Elijah, sometimes even more than picturing a shared experience with my father. And yet, I want to connect with him about those moments, when I was entering into actual personhood, and he couldn’t have known what he was doing, even when he thought he did.

I had a complicated relationship with my dad, which certainly doesn’t make me unique, but the confusion over missing him versus an idea of him certainly extends from this dynamic. Beginning with my teen years and for most of the following three decades, our relationship ebbed and flowed. Sometimes, I wouldn’t speak to him for a few months. I practiced an enormous amount of subconscious (and ultimately self-sabotaging) rebellion against him

And so my struggle most often translates to one of guilt: Do I have the right to miss my father? When I so frequently pushed against him for so long? Who am I to wallow in sadness and loss when I failed to foster a closer adult relationship. If anything, I did the opposite. Hell, 400+ miles to Los Angeles wasn’t far enough, so I moved to the east coast!

And yet, years of therapy have taught me that it’s not that simple. So ... I struggle. And whenever I get frustrated at Elijah, I feel like I’m being hazed for all the times I caused my parents such agita. And whenever I’m holding him trying to get him to fall asleep, I wonder what my dad would think during similar nights with me, as he stared at his perfect little boy, dreaming and hoping for a magnificent life in front of him. I doubt my dad would ever have thought to himself, “I hope I don’t fuck him up!” like I frequently do. Yet, not since at least my pre-teen years do I recall feeling a closer connection to him than I do in those moments, even though he’s no longer here. I shouldn’t be surprised that the inability to discuss it with him feels like such an enormous loss. And still ...

I wrote four other versions of this post before settling on this one, just starting over each time and pulling a little piece here and there from before. Those different drafts, each with its own focus ... maybe I’ll save for tomorrow, next week, next month ... or never. I don’t know. One day at a time and all that, right?

I know my struggle with the remnants of our relationship is not my dad’s fault, per se. Our relationship was as it was, and I live with this ongoing seesawing confusion because of and in response to the environment of his own upbringing and development. I try hard to honor and celebrate the good memories, acknowledge the bad ones, and be grateful for all that I learned having Stephen Mark Dobbs as my father for the first 45 years of my life.