I’m back. Or, am I? Hard to know. I’d like to think so, even though I’m not sure what being back means; what I’m back to; what the results might be.

Hell, I started this post two weeks ago. I spent a lot of time away from it, thought I’d finished it, left it behind for a few more days. and here we are posting on some random Monday. (FWIW, 24 hours ago, that “Monday” read “Sunday.”)

I launched this incarnation of Out of Focus 15 years ago, but for over a decade, my little corner of the interwebs occasionally sputtered a bit, but mostly settled in to a state of inertia. I can’t say how many times I have attempted to return to this space. Many? No. Many many? Closer.

I often asked myself, Why bother? If I feel so compelled to write, should I not focus on other work? Producing words possessing the potential to earn income? Whether that means working on just one of my multiple unfinished screenplays, or pitching and writing freelance pieces like this or (just a couple weeks ago) this, would it not make more sense to spend my limited time, effort, and emotional energy on work that has at least the theoretical prospect of generating income? My greatest successes on the job front currently remain in the growing-ever-more-distant past, and writing begets writing! Right? (So writers tell me.)

I will never develop, achieve, nor drift along with that often-elusive flow if I just dip my fingers into the stream now and then.

But, let’s say I do choose to make a go of it and pursue more writing opportunities of any sort than I have so far. My clips? They’re old. This blog is so old, I missed its Bar Mitzvah. I don’t even know that it wants its learner’s permit.

The last continuous, albeit brief, period of my feeding this site was my 13 for ‘13: Thirteen posts during the summer of 2013. (Unintentional synchronicity.) I've produced more children (two) in the past 5 1/2 years than blog posts (one). Sure, the kids are a co-production, and their existence complicates my ability to find time to write, but of course, I can turn that around and say, "But Aaron, you can't find time to write; you must make time to write."

I’ll never earn anything from my writing if I have no recent writing to show. And even more important than the age of my work: Has it aged well?

Some? Maybe. I found a Seinfeld spec script that I wrote 25 years ago, and considering both its age and my then-age, I surprisingly didn’t hate it. In fact, I actually thought it was, dare I say ... good?

But the rest? I have great difficulty reading most of it. During my periods of greatest prolificacy, I edited far less. That was my “style.” (In many cases, such as mine, “style” is what bad writers use as an excuse for bad writing.)

So, I have to start somewhere. Might as well be here and get something for my ongoing $8.95 per month contribution to Endurance International Group’s revenue stream.

Actually, all this hemming and hawing about not writing seems silly considering that I have, in fact, written hundreds of thousands (probably even millions) of words over the past decade, but few were meant for public consumption. I have a number of posts meant for this space that died before publication. I never finished them, or they no longer felt timely, or while editing I decided they were crap. But even those attempts only represent a tiny minority of what I mean. 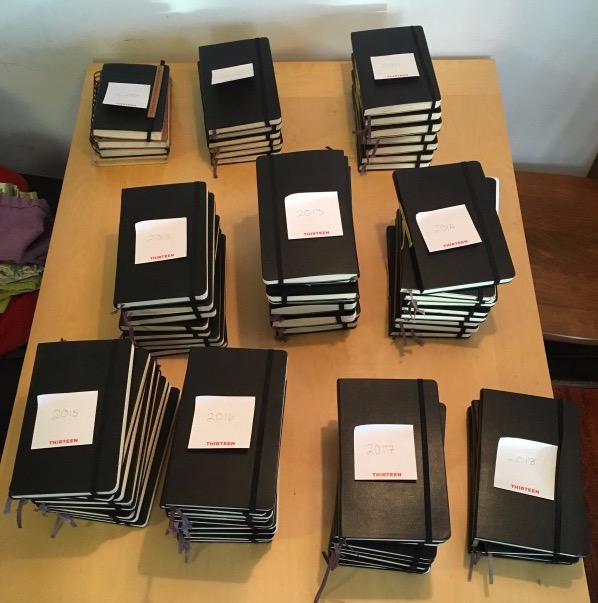 More than 10 years ago, I first attempted to work through “The Artists’s Way,” Julia Cameron’s 12-step program for those of us addicted to artistic procrastination and creative blockage. Over the past 3,356 days, I have written my version of “Morning pages” virtually every day. Some months, keeping up with this practice has proven too challenging. For example, five months encompassing the end of 2017 and early 2018 produced a dark age lacking any evidence of how vital this endeavor had become to my daily well-being. But that period aside, I estimate well-over 3,000 entries included within my 50-plus Moleskine notebooks.

As my 2 1/2-year-old son gets into everything, keeping him from scribbling in or ripping pages out of those notebooks has been challenging. So the other day, I pulled them off their easily accessible shelf, organized them by year, packed them into boxes, and took them to storage.

Should I have bothered? What do I do with them? Why have I kept them? I don’t know, but I can’t throw them away. At least not yet. Collectively, their existence sparks a lot of joy.

And I guess I feel the same way about this blog, which as I noted in my second post in Feb. 2004 took its name from my column for the The UCLA Daily Bruin. My time at the paper was both my first ongoing and consistent writing for public consumption as well as a major contributor to my never finishing my degree at UCLA. (That’s a long story for another time, however.)

My first published article elicited hate mail. The writer called my silly column “drivel,” and decried *The Daily Bruin* for giving such content a forum in its valuable pages. To be fair, the piece was, essentially, “drivel”: An unnecessary (and pretentious) attempt to announce my arrival as a critic and columnist to the UCLA community, presented in the guise of a dream featuring 1990’s most famous film critics welcoming me to their ranks and yelling “I’m right, you’re wrong!” at each other.

When my editor showed me the letter, I felt crushed. I hadn't even written my first review yet, and I've already received hate mail? The letter-writer was a stranger to me, and nobody else cared. If anything, everyone thought someone taking the time to write and mail (1990 here!) a letter about my column was a bit crazy. I still wrote reviews, participated in major press junkets, interviewed celebrities, attended the Spirit Awards and Oscars, and in 1992, the incoming Editor-in-Chief and Managing Editor drafted me as Editor of the A&E section. That single piece of hate mail had no lasting impact on my tenure there.

And yet, more than a quarter century later, not only do I vividly remember that crushing feeling, but here I am writing about it.

For me, that’s even more reason for my return to this secluded corner of the most public of spaces. So I’m back. For now. For today. Hopefully tomorrow? We’ll see. A few times each week, at least? That’s the minimal goal.