« Trusting Douglas Adams on the Importance of 42: The 10th Annual birthday post on my fourth Jack Benny birthday | Main | An Appreciation for Susan Smith » 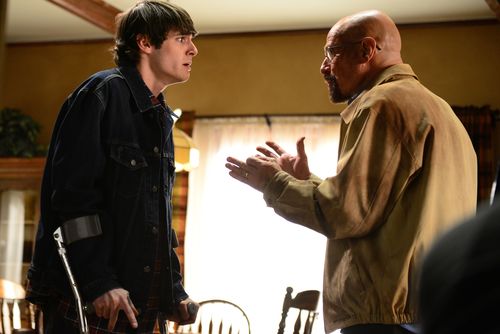 The relationship between Walt and his son forms the primary foundation at the heart of "Breaking Bad." (Photo credit: Ursula Coyote/AMC)

I suppose I'm not surprised that many felt less satisfied with the "Felina" – excuse me, the finale – of Breaking Bad than I was. I've read tweets and posts that seemed even more enthusiastic; and others – including from huge fans of the series – who were obviously at least a bit disappointed. Many people have spent the past year or two proclaiming Breaking Bad as the greatest television show of all time due to its complexities and nuance. Yet now, their perceptions that the series wrapped itself up too neatly has led to dissatisfaction with its conclusion. Based on what I've read so far, most people imagine that since Walt's death seemed inevitable, there were only two possible resolutions: Walt would die redeemed, heroically; or Walt would get the comeuppance he deserved. And yet, that binary option seems to ignore that more complex and nuanced middle ground in which both may have occurred.

Linda Holmes, who writes NPR's "Monkey See" pop culture blog (a must read, in my book), expressed her own dissatisfaction with the episode stemming from her interpretation that ultimately Walt went out exactly as he wanted to, by his own design, allowing for his own megalomania. Even with his admission to Skyler that it was all for him – and not the family – and that "I liked it," decisions such as manipulating a method to pass along his money to his kids – thereby depriving them the choice of declining it --  was neither loving nor kindhearted.

Willa Paskin described on Slate why the finale was unsatisfying to her, or at the very least left her conflicted: "After everything, after five seasons in which the writers were clocking Walt’s every misdeed, at the very end, they turned out to be Team Walt. Despite everything he did, Walt was rewarded—not with life, too much had gone down for that—but with a death on his own terms. He died having provided for his family, without going to jail or giving up on his legend."

I really enjoy reading both Holmes and Paskin, along with the A.V. Club's Donna Bowman and the throngs of other great writers expounding on Breaking Bad, and yet unmentioned in everything I've read is the one element that formed the heart of the entire series, which also happens to be the one area where Walt irrefutably had no control and did not "win": His relationship with his son Flynn, a/k/a Walter Jr.

Arguably, this relationship formed both the catalyst, underlying foundation and slow but dynamic progression for the entire. Until Walter Jr. learns the whole truth just two episodes ago in "Ozymandias," his father is his hero. Walt's concerns for his family at the beginning of the show center on his concern for his special needs son. He's worried his death is imminent and that Skyler will be unable to handle Walter Jr. on her own. Baby Holly isn't even an issue yet, and while Walt loves Skyler, he requires his son's hero-worship in order to not feel like a complete failure.

Sure, Walt's need for his son's hero-worship also exposed his ultimate narcissism, but that does not negates that what kept him going was the need to maintain Walter Jr.'s view of him. Skyler's discovery of the truth never worried him nearly as much as the catastrophe Walt must have always realized would result from Walter Jr. learning about his father's alter-ego. Walt's early decision to enter the world of manufacturing meth triggered all the other, darker qualities that revealed themselves over the course of the series, but the catalyst was his honest and true love for his son, which also perpetuated his consistent deception.

Walter Jr. is also the moral center of the show. Maybe his morality is blind to nuance, but I think the audience appreciates that. (At least I do.) Hank was arguably the only other main character good guy and moral authority in the show – it certainly wasn't Skyler, Marie or Jesse, no matter how much we may "like" and root for any of them. But Hank too was ultimately controlled by his own self-interest and perspective, which ultimately killed him. During his recovery, he craved pity while simultaneously reviling it, and he behaved horribly to Mrie. Outwardly or not, Hank constantly whined about his predicament, even as it was likely that he would recover and be able to walk again. Walter Jr. will always be tied to his crutches.

The relationship with Walter Jr. also informs almost all of Walt's actions towards Jesse, who Walt sees as his surrogate son: The one with whom he can be honest; the one to whom he can boast and prove his meth-making greatness. Even as he usually seems determined to protect Jesse, he certainly doesn't feel the exact same responsibility to him as to Walter Jr.; not saving Jane and poisoning Brock proloking to eliminate the competition because he needs the love and respect of his child, in this case in the form of his apprentice.

Jesse also plays an important role in Walt's not controlling everything to his liking. Jesse does not follow Walt's direction; he does not shoot Walt. Jesse is smart (or at least experienced) enough to know that Walt wants to perform one last manipulation and achieve some semblance of martyrdom by his loyal subject. Walt gets the satisfaction of saving Jesse, but he also knows he no longer has any control over him.

Even if Walt was able to find some degree of reconciliation with Skyler and to manipulate the Schwartzes into helping launder his money; even if he could kill the neo-Nazis, exact revenge upon Lydia and save Jesse, Walt knows that he has utterly and completely lost Walter Jr. That realization hit home during the phone call at the end of the previous episode, "Granite State." Walter Jr. will not try to understand his father; Walter Jr. will not knowingly accept his money; Walter Jr. will never forgive him. His father was his greatest hero, but became his ultimate villain. Walter Jr. hates Walt. He despises him. There is no turning back from that. Redemption is impossible.

Bryan Cranston's performance throughout the series may have never been better - and that's saying something! - than in all the quiet moments focused on his eyes over the past few episodes. One of the most profound of those moments was at the end of phone call because not until then did Walt realize that he would never be able to manipulate his son. We could see that realization in his eyes. And in "Felina," we know that Walt understands that reality as he watches Walter Jr. return home from afar, hidden. Sure, the house is being watched, so Walt can't reveal himself. But he got in to see Skyalr, and he got out, and if he was determined to see Walter Jr., I think he would have figured out a way. Instead, Walt knew doing so would be pointless. Maybe he was selfishly protecting himself from another painful encounter of his son's anger and dismissal, but either way, that relationship is dead, and Walt knows it. That reality is far from the situation he desired.

Many of Walt's actions throughout "Felina" signal Walt's striving for some degree of redemption and achieving hist main goals in that quest, at least as far as could be accepted with a character who had succumbed so dramatically to his basest and most immoral desires. And yet, maybe more attention also needs to be paid once again to the temporal reality of the show. Walt was holed up in that cabin in the woods, alone, without contact with the outside world for months, other than during Ed's brief supply visits. In "Granite State," we see his lonliness and desperation when he begs Ed to stay with him just for another hour. $10,000 was the price for one hour of card-playing companionship.

I don't believe Walt ever lied when he claimed that all his decisions and actions were for the well-being of his family. He consciously  believed that, even as we knew understandably and rightfully judged him. This explanation was how he justified his actions to himself. It's human nature to lie to oneself, especially when rationalizing one's own questionable activities.

But isolated and literally dying for nearly a year, it not only seems unsurprising but in fact likely that Walt discovered himself and his true motives for the first time. That's why his revelation to Skyler was so powerful to me. When people have examined Walt as a protagonist, the focus has generally been placed upon his journey from mild-mannered and weak chemistry teacher to delusional and immoral meth producer and drug lord. But a protagonist doesn't need to only change in one direction; he can learn about himself up until the very end, and that's what I saw happening here. His admission to Skyler was obviously as much for himself as for her, but he also never had the self-reflective capacity to have made it before.

I certainly can't speak for everyone else, but throughout Breaking Bad, I have repeatedly had to remind myself that only a few days or weeks have passed within the show's universe when it's been a year (or more) between episodes. That temporal element plays an extraordinarily important part in this finale.

I found last night's episode of Breaking Bad to be highly satisfying precisely because it appears that Walt won even though he lost what meant the most to him. It is a continuation of Walt's delusion: By trying to control everything around him, he sees himself succeeding, but every step of the way, he still encounters some sort of failure. Sometimes, the failure is blatant and obviously huge - such as with Hank's death - in others, more subtle. The progression of how Walter Jr. sees Walt over the course of the series's roughly 60 total hours is the heart Breaking Bad. The fact that so much of that dynamic plays out through subtext is a huge part of the show's brilliance. No part of whatever redemption Walt may feel he has achieved can alter his awareness at the moment of his death that the person most important to him in the world will hate him forever.