« The oldest of them all: The history (and rivalry) between Showtime & HBO (thoughts spurred by a conversation with Showtime) | Main | On the "Breaking Bad" finale - Walt didn't win: Don't forget Walter Jr. »

Trusting Douglas Adams on the Importance of 42: The 10th Annual birthday post on my fourth Jack Benny birthday 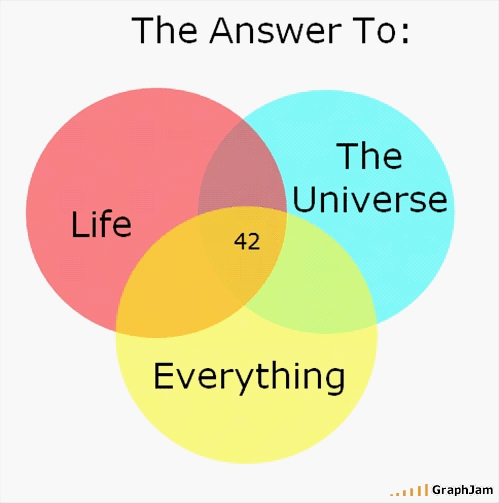 I did something different this year before sitting down to write this post: I read the previous nine. Since I began this blog in Feb. 2004, I can only claim one constant: Without fail, on Sept. 21st of each year, I have written a post acknowledging, sometimes even celebrating my birthday. That's something I do much less frequently in the non-digital world, although this year, as I become 39 IV (or 42, that supposedly magical age that is the answer to "Life, The Universe and Everything" according to noted philosopher Douglas Adams), my wife is determined that we celebrate this day that marks my birth and recognizes my achievement in aging.

It's been quite a year, too, with some amazing highs, a few discouraging lows, a bit of misery but also a lot of hope. Since I wrote last year's birthday post – just shy of six weeks after getting married – we went on our real honeymoon: Three weeks (give-or-take) to Australia and New Zealand, a dream vacation that we desperately want to repeat if only because that is nowhere near the proper amount of time to visit one of those countries, much less both of them.

Then in April, after another lovely little vacation – this one to Hawaii to celebrate my father's pending 70th birthday – I parted ways with my job at a previously mentioned, very important cultural institution memorializing the tragic events of just over 12 years ago (that's called anti-SEO language, FYI). This was an important occurrence of mutual necessity. As I mentioned last year at this time, I wasn't feeling very much like me anymore; I was pretty removed from everything I enjoyed doing, especially professionally.

This summer has been challenging: I'm still looking for more consistent work and trying to write a much more frequently. As I mentioned in what I guess was my latest "Hey, I'm back" post, writing has become more difficult for me than ever, but I continue to plow through, and I think I'm more satisfied with most of the results. At least so far.

As I journeyed through the majority of the past decade revealed by those first nine birthday posts, I was a little amazed at how well they represent each of the periods of my life from which they sprang, sometimes more subtly than others, but in ways that kind of astounded me. Just last year – in an epic entry that subconsciously must have been due to my not having added anything to this blog for the entire previous year – I wrote that "I never intended to regularly use this space as a public diary." That was a very true statement, and that intent hasn't really changed. But when I examine what those nine entries represent, my intent obviously doesn't hold as much sway as I would think.

The first birthday post, in 2004, was full of exuberance as I turned 33. Ah, the worries and anxieties that show themselves over the ensuing years as I got older; they all seem silly now, although only in that I had them then, since so many likely remain. But it is somewhat amazing how young 34, 35 and 36 seem when you're turning 42.

Dammit. I'm not carrying the Jack Benny mantle all that well when I keep forgetting the appropriate public age.

I guess I'm putting a lot of weight on 42. I don't particularly like constant pressure, but it seems to be my primary operating modality, mostly self-inflicted. So, I'm expecting big things for this next year. I'm lucky in that I have a wife who loves and supports me in ways I never imagined possible. She regularly believes in me far more than I do in myself, and I'm working my ass off trying to honor that.

Plus, in roughly six months time, we're going to have a new addition to our little family, which absolutely is the most exciting and terrifying of all the life events I have yet encountered ... and he/she isn't even here yet.

On a side note: Is it really that weird to not want to learn the sex of your baby in advance? I know the majority of people are curious, and it seems like virtually every new parent I know has learned the sex in advance. You can do it so much earlier now too, from a blood test right around 12 weeks. But we think it's one of the last great surprises, and not having gender-specific clothing and toys doesn't seem that big a deal to us. Plus. my family has lots of data over two generations stating that a boy is most likely. Besides, I don't want to get into that thousands-of-years argument, but …. I digress.

I was at a wedding last night, and one of the other guests sitting at our table exclaimed, "I love being an adult." She's about 32 and was expressing her excitement and joy about being at this beautiful event, celebrating friends. And yet, I found myself thinking, "Meh, it's OK. I still wish I was younger." I know that the desire to be younger really only comes from a place of regret for things felt undone, unaccomplished or missed. I guess I do have a lot of that, and so my birthday resolution is to let it go; leave it behind; move forward. I'm going to have to if only because my time for being selfish is on a countdown clock, and by the time my half-birthday (the due date) roles around, there's an entirely separate and individual life-form joining us who won't have much patience for that sort of thing.

So, as I usually do each year, I once again wish a happy birthday to all my birthday mates, acknowledged frequently in many of these posts, but most of all, I wish to experience the happy in happy birthday for myself on this day in this space in which (for this purpose) still feels most comfortable, I say, thanks for reading, and happy birthday to me.

See you here next year. (And sooner.)

Oh yeah. And happy International Day of Peace, everyone!

P.S.: Those nine previous posts I mentioned ... you can find them here ...

2007: "This Just Means I've Been Writing This Blog Too Long"

2012: "The Ninth Annual Birthday Post: Another First (On My Third Jack Benny Birthday)"