Is the "Third Golden Age of Television" the new '90s Indie Film phenomenon? Let's talk to some cable execs and find out! 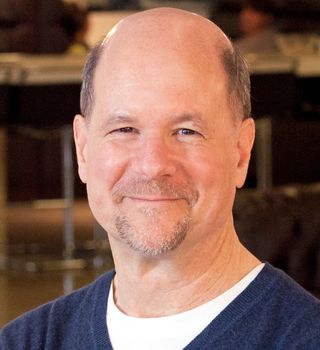 Perry SImon of BBC America
What a great way to start a (Jewish) New Year: For some time now, I've been working on putting together a series of interviews with cable network programming heads for Indiewire. Today, they published the first of these: my chat with BBC America General Manager Perry Simon.

As I write in the intro to the Perry Simon interview, BBC America has made a huge splash in the original programming arena in just the past 18 months. They've gone two-for-two with Copper and Orphan Black, receiving plaudits from both critics and audiences. They seem to be at the tip of the iceberg with Orphan Black, which built a steady fanbase during its initial broadcast, but should see a major audience uptick when the second season hits in the spring due to all the notoriety it – and its phenomenal and talented star Tatiana Maslaney – has received in the months since its first run. Simon described BBC America's approach as "very auteur oriented," so it should be fascinating to see what kinds of series the channel presents next.

Eight years ago, I regularly conducted interviews for Gothamist, which always comprised several questions I asked everyone along with another set of questions tailored specifically for that subject. I've approached this series the same way. I have a few other interviews completed or scheduled; they should be published over the coming weeks, and I continue arranging more.

I raised this idea with Indiewire TV Editor Alison Willmore not long after she established the site's television coverage, but I didn't have the time to work on it then. Television has gone through such a shift over the past decade, and I thought it coincided with, and arguably benefited from, the end of the 1990s indie film explosion. At the 1989 Sundance Film Festival, Steven Soderbergh's first feature Sex, Lies, and Videotape became the Big Bang of a new era for independent film that peaked by the mid-1990s. But by the turn of the millennium, "independent film" described a perceived – often artificial – aesthetic much more than it did a form or method of production.

At its apex, big Hollywood wanted in on the game, and most of the major studios opened their own "indie" or "art house" divisions. New Line Cinema was ahead of the curve, establishing Fine Line Features in 1990. Disney simply bought Miramax outright while Warner Bros. corporate parent Time Warner acquired New Line and Fine Line. The other majors scrambled to establish their own specialty divisions: 20th Century Fox created Fox Searchlight, Universal started Universal Focus and Paramount formed Paramount Classics.

In the mid-'90s, cable television's original programming still focused on feature-length movies. HBO – long at the vanguard of cable trends – wanted a piece of this indie film cred and in 1996 established a division called HBO NYC Productions. HBO NYC aimed to be the Miramax to HBO Pictures' Disney; or the Fine Line to its L.A.-based big brother's New Line. HBO NYC would make grittier, artsier feature-length movies for the channel. The budgets would be lower than the splashier HBO Pictures productions while taking advantage of the literary, artistic and theater scenes of New York. Among the films produced under the HBO NYC banner were If These Walls Could Talk, Subway Stories, Always Outnumbered, and made-for-TV movie Emmy winners Miss Evers' Boys (1997) and A Lesson Before Dying (1999). (Full disclosure: I worked for HBO NYC head Colin Callender during most of the division's existence from late 1996 through mid-1999.)

In early-1999, HBO made another shift. The Sopranos premiered in January of that year, and whether anyone knew it or not, the entire paradigm of television was about to change. Coincidentally or not, by that point, HBO NYC was no longer trying to be the "indie" division. By mid-year, HBO Pictures and HBO NYC were fully merged into HBO Films, and the NY presence was shrunk to one development executive and one book scout. In retrospect, the timing of HBO's consolidation of film development makes perfect sense. Over the following few years, HBO Films attempted to launch movies through festivals and offer theatrical runs, eventually participating in the formation of the distributor Picturehouse. But even more importantly, feature-length scripted programming was also about to become secondary to the channel's original series.

HBO had produced original series for some time, but until Oz arrived in 1997, they primarily focused on comedies that featured lots of naked breasts. Who remembers the 1980s football comedy 1st & Ten starring Shannon Tweed and OJ Simpson? Or the clever but still boob-obsessed Dream On? the Robert Wuhl-as-a-sports-agent comedy Arli$$? Granted, in between those two was also the ground-breaking and brilliant The Larry Sanders Show. (Not that HBO has since shied away from continuing to appreciate female nudity even as the quality of their shows improved. Ba-da-bing!)

But Oz led to The Sopranos, whose success encouraged Six Feet Under in 2001 before HBO finally launched the series that made TV haters into cable fanatics after The Wire hit screens in 2002. Arguably, those three years were also when we began to see a decline in the kind of independent film production and theatrical releases that had dominated the worlds of filmed entertainment for the preceding decade.

I'm not arguing that the lead-up to this now-monikered "Third Golden Age of Television" is a direct result of big corporations and pop culture co-opting the '90s independent film movement, but the progression is more linear than one might first imagine. Nor do I want to enter the debate about whether film (especially independent film) is dead or alive. More movies than ever are being made today; colossally bloated atrocities as well as tiny stories easily overlooked, many deservedly so. Even as technological and economic concerns have made it logistically and financially easier than ever to make, truly independent film seems to have reclaimed the meaning of "independent."

And yet, even with more film criticism and conversation than ever, the cultural conversation focuses far more on Orange Is the New Black and Breaking Bad than on the relatively small discoveries from new voices like Short Term 12. The conversations exist, but they've become far more niche. Would a Sex, Lies, and Videotape, Reservoir Dogs, El Mariachi, Slacker, Gas, Food, Lodging or Red Rock West break through today? Hopefully. Certain films obviously do. And this summer in particular, we've seen smaller genre fare have a big impact on the marketplace. But even during the onslaught of Mumblecore features a few years ago, the ability of contemporary independent films to crossover and find mass appeal seems to have become far more challenging.

The increase of on demand and streaming has made it easier for people to see plenty of films, but they still need to find them. And many of those filmmakers who were the hot-young-talents of the 1990s – the next great generation of filmmakers – obviously experienced that crossover, launching careers that now allow them to make what they want when they want to. Still, for every Steven Soderbergh, Richard Linklater and Robert Rodriguez, one can also name people like John Dahl, Nick Gomez, Ernest Dickerson, Allison Anders and Michael Cuesta. (Granted, his L.I.E. wasn't until 2001). Obviously, plenty of filmmakers – including members of that list – continue to make features, but many are also choosing to focus more -- and making bigger splashes in - television.

This is a subject I plan to explore in more detail in the future, but with this series of interviews I hope to get a sense of why these decision-makers who are responsible for what we see on our television screens – and computers and other devices, natch – think this shift has occurred, where they see the format of "television" (whatever that may mean now) going in the next several years, and what factors determine their original programming and make their channel's series special and distinctive.