« "Casting By": An underappreciated job and the woman who changed it and Hollywood | Main | Context and Peter Bogdanovich's magnificent "Targets" »

I probably spend too much time marking milestones. I often attribute significance to dates, especially when I'm able to choose both the event and the date. For instance: 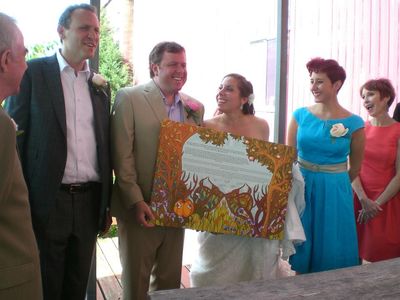 Last year, I intended to post about my pending marriage. Then, once I hadn't, I meant to write about the wedding that was. But between the pre-event scrambling, the mini-moon that followed and the return to all-consuming work after, I simply didn't get around to it.

So as our first anniversary approached, it seemed only appropriate to celebrate in this space. We had an amazing wedding, on a virtually perfect day with sunny skies, comfortable temperatures and barely any humidity, all important qualities for an outdoor ceremony alongside a peach orchard.

As we considered locations, we realized we wanted a place that could be more than just a wedding venue to us; someplace that we would want to visit again in the future but not because we were married there. Rather, we wanted a place that would become a part of our lives; where we could return year-after-year with our family. That this place was the location of our wedding would become a secondary bonus. So with that in mind, what could be better than a pick-your-own-fruit orchard?

So far this summer, Marissa and I h 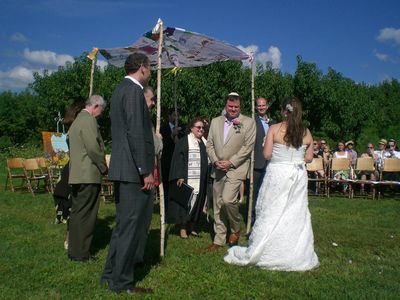 ave returned to Fishkill Farms three times: strawberry picking in June; blueberry and raspberry picking in July; and just yesterday, in order to properly begin celebrating our first anniversary, we picked peaches and nectarines, including a selection of white peaches from the very trees that witnessed our nuptials 52 weeks ago.

Aside from the day flying by too fast – which seems to be the standard for lucky couples – and my forgetting about and missing these special grilled cheese sandwiches that I had specifically requested of our caterer during the cocktail hour – the only part of our wedding day that was less-than amazing was something we were iffy about in the first place: Our marriage announcement in The New York Times.

After the fact, the question I received the most from those who saw it was, "How did you do that? I thought it was so hard to get in The Times." Submitting an announcement to the Times is more time-consuming than complicated. Maybe they lowered their standards, but we just submitted ourselves through their website. I filled out a long questionnaire online that discussed both of our backgrounds as well as information about our wedding day. A few weeks later, I received a phone call essentially fact-checking the details I had provided.

Our picture didn't run in the print edition, but it does appear with the online version on the website. However, the absent photo is not what bothered me about it.

I still receive the print edition of the Times on weekends. Call me old school, I suppose, but I enjoy flipping through the physical pages of The New York Times Magazine and the Arts & Leisure and Week in Review sections, in particular. I also often scan the wedding announcements, and I've long thought about the fact that no matter how people change over the course of their lives, for at least this one brief moment, when I read a couple's announcement, I develop a tiny sense of this couple solely from the text on the page.

By that criteria, The New York Times shouted to the world that I was 40 years old, graduated from NYU, ran visitor services at the 9/11 Memorial, and most likely grew-up in San Rafael – since both of my parents live there. For those unfamiliar with the Bay Area, San Rafael is in the heart of Marin County, across the Golden Gate Bridge from San Francisco.

This October, I will have lived in New York longer than I lived in San Francisco, the city of my birth and where I spent virtually every day of my first 17 years. I have never lived in Marin, although I did commute from the city to a town called Ross every day for high school. It may seem like a silly - even petty - thing, but as much as I love New York and almost certainly am here to stay, I take great pride in being from a place as magnificent and unparalleled as San Francisco. And as many (every?) snobbish San Franciscans will tell you, the rest of the Bay Area doesn't count.

I wanted to mark this first anniversary with a correction to the announcement from the "paper of record." Also, a lot can change in a year, and in fact, a lot has: Neither Marissa nor I are in the same jobs as one-year-ago-today, and in both cases, those are positive developments.

I know the wedding announcement is meaningless, and it certainly did nothing to dampen the beauty of that day one iota. What mattered was our amazing wedding and the love that was showered upon us by our family and friends. We had the opportunity to start our fantastic life together on that day, and now on this one, we get to celebrate for the second time.

Still, for the past year, my to-do list has contained this item: "Rewrite NY Times wedding announcement for blog." Since it feels good to check-off items, my anniversary present to myself is to finally fulfill this simple task, albeit with a little updating to also mark this first anniversary. Maybe this will be the beginning of an annual tradition, marking the progress of this life we'll share together, just as I've managed to maintain a birthday post every year since I began this blog, even when I wrote little-to-nothing else. We'll see.

So if The New York Times ran anniversary announcements, below is what I would like to have seen run today, an altered and updated version for Aug. 12, 2013.

The bride, 36, will be known as Mrs. Kaplan Dobbs. She joined the New York City Department of Health and Mental Hygiene as a project manager in February after spending the previous year-and-a-half as a project administrator at the Center for Suicide Risk Assessment at the New York State Psychiatric Institute at New York-Presbyterian/Columbia University Medical Center in New York. She is also pursuing a Master of Public Health degree in mental health policy and management at Hunter College. She grew-up in Brooklyn and Upper Saddle River, N.J. before graduating from Hampshire College in Amherst, Mass and spent several years in lighting design and production management for stage and film.

She is a daughter of Phyllis S. Feinberg of Dobbs Ferry, N.Y., and Kenneth N. Kaplan of San Diego.

The groom, 40, is a writer and until April served for two years as the director of visitor services at the 9/11 Memorial. Born and raised in San Francisco, he studied theater at UCLA and graduated from New York University. He previously was the director of programming operations and an associate programmer at the Tribeca Film Festival, having first joined the festival as a volunteer during its initial 2002 edition.

He is the son of Judy L. Dobbs and Stephen M. Dobbs, both of San Rafael, CA.