« PAUSE FOR PODCASTS: An Introduction, and Goodbye to "It's All Politics" | Main | Studying The Brady Bunch finally pays off » 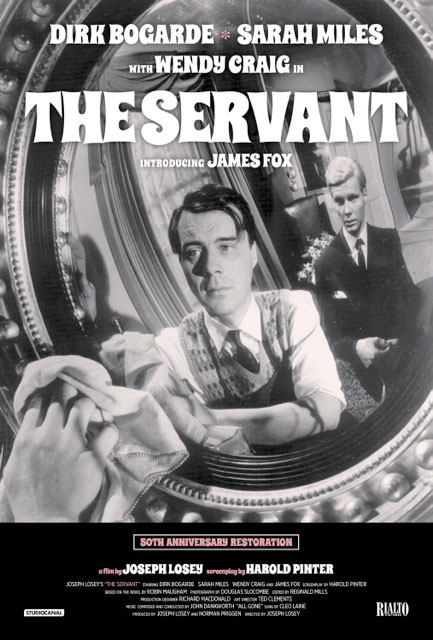 More violent than any of the tentpole summer blockbusters at the local multiplex, Joseph Losey's 1963 film The Servant examines the diminished and disintegrating British class system of its era. This new restoration for the film's 50th anniversary presents a stunningly claustrophobic and utterly engaging experience for audiences, and if you've never seen it before (as I hadn't), rushing down to Film Forum before it ends its run on Thursday should be a top priority.

The story centers on a young but lazy member of Britain's upper crust named Tony (James Fox) who upon returning to London from time abroad hires Barrett (Dirk Bogarde), a seemingly dutiful and professional live-in butler. The idea of a young bachelor living alone with a manservant was enough of a relic by the early '60s that even Tony's suitably positioned and wealthy girlfriend Susan (Wendy Craig) doesn't understand or like Barrett's presence. As the story unfolds and Barrett reveals his true motivations, the line between master and manservant blurs, and in more than one scene during the absolutely brilliant final third of the film, the two better resemble an old bickering married couple.

With excellent performances all around – including a near-perfect case study in sexy swinging sixties coquettishness from Sarah Miles, introduced to the story as Barrett's sister Vera – the film truly rests on Bogarde's shoulders. He somehow achieves a perfect blend of passive aggressive subservient mischievousness. The subtleties of Bogarde's performance allow Barrett to slowly evolve and transform from soft-spoken and composed to aggressive and dominant.

The first of three collaborations between noted playwright Harold Pinter and Losey, The Servant plays like an Upstairs, Downstairs trip into an alternate reality where everything proper, expected and controlled has been flipped on its head. In fact, the entire film feels like an exploration of flowing duality, a steady and unceasing transference between Yin and Yang. Each character experiences both moments of total control and utter submission; the story itself focuses on the eventual reversal of roles; and even the structure of Losey's storytelling complicates the nature of the protagonist/antagonist relationship.

These multiple realities present themselves in very concrete ways throughout the film. Although set primarily in a large townhouse, Losey shoots most of the action in tight-closeup or showing just a small part of a room with one character dominating the foreground. He repeatedly returns to the narrow foyer and stairwell or shoots through a doorframe from one room to another, further constricting the space and eliciting a tension-raising sense of claustrophobia.

Losey also regularly utilizes mirrors and their reflection (as shown in the film's poster, above), and in one of my favorite sequences, he creates a magnificent separation between Tony's old world represented by Susan and the developing one controlled by Barrett, from which he can't escape. The scene occurs at what seems to be the moment Tony has regained the upper-hand, discovering Barrett's duplicity, but Losey hints that something very different is actually happening. Keeping both images in focus, he divides the frame between a tight shot on the area immediately in front of the mirror and the action within the larger space in its reflection, providing an obvious but no less magnificent through-the-looking-glass moment that further moves Tony from one realm to the other.

In an era when some of a certain political persuasion use "class warfare" an unthinkable derogatory term despite its constant presence in society, The Servant remains ever-relevant and never feels too dated. That's some achievement for a film that couldn't be more rooted and specific to its time and place.