« Sorry: The Apple Family has nothing to apologize for | Main | A Civil War Christmas: A fascinating, serious and fun pageant for the ages » 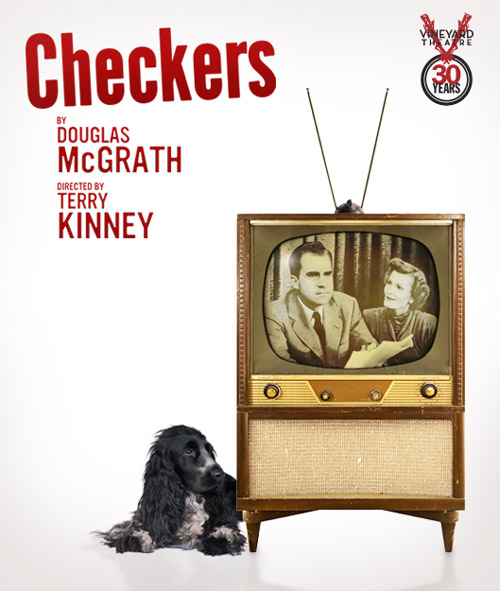 I guess I just expected so much more. The story behind the story of Richard Nixon’s infamous “Checkers” speech; Terry Kinney in the director’s chair and the very talented Anthony LaPaglia and Kathryn Erbe doing the majority of the heavy lifting on stage; a script by the politically astute Douglas McGrath, who gained some satire chops while writing for SNL and received an Oscar nomination for co-writing Bullets Over Broadway with Woody Allen and has directed his own filmed adaptations of Jane Austen and Charles Dickens and had the misfortune of bringing his (arguably better) Truman Capote movie to the screen second.

Missing from McGrath’s approved bio and credits in the program is theater, and his background with sketch comedy and multiple-short scenes edited together sticks out like a sore thumb throughout the entirety of Checkers, which closed today at the Vineyard Theater. McGrath and Kinney tell the story through one long flashback, framed by two scenes in 1966 focused on Nixon (LaPaglia) deciding to run for president in 1968, against the wishes of his wife Pat (Erbe).

The majority of the play occurs during the 1952 presidential campaign. Dwight Eisenhower chose Nixon as his running mate, however, his campaign was surprised by rumors of a secret (and potentially illegal) slush fund operated by Tricky Dick. McGrath doesn’t provide any real explanation for why Eisenhower ever chose Nixon, but he does make a point of establishing that Ike’s campaign managers and the majority of the Republican establishment is not too fond of the Quaker from California.

When this scandal erupts, Eisenhower must decide whether to drop his running mate from the ticket, and eventually, the campaign forces Nixon to make a 30 minute televised speech explaining the truth behind any fund (that it didn’t exist) and why he did nothing wrong. With that speech, Nixon saved himself and helped seal the deal for Eisenhower. The part most of the audience remembered most distinctly, however, was the few sentences describing the puppy a supporter had sent to him and that his daughter Julie had named Checkers. Suddenly, anyone accusing Nixon of doing something improper was trying to take a puppy away from a little girl, and over 99% of those who chose to call or send a telegram to the Republican National Committee supported the candidacy of the potential Veep On this night, television saved Nixon; ironic, considering how it betrayed him just eight years later running against JFK.

The Checkers speech was a seminal moment in modern American political history. To McGrath’s Nixon, it was his darkest hour. That is not my interpretation of the play, but rather the statement Nixon utters in order to throw the audience from the opening scene back in time 14 years. I would have been much more satisfied had Wayne and Garth simply walked onto the stage waving their arms back-and-forth and up-and-down while making that “do-do-do-do, do-do-do-do” sound.

Checkers feels like it was constructed for a fourth grade history class, lacking nuance and a Dragnet-like “Just the Facts Ma’am” sensibility. Every character comes across like a cartoon, especially as they attempt to present the flat, clumsy dialogue. The story is fascinating, so why is the play relatively boring?

At least 2/3 of Checkers consists of a series of short scenes, doing little other than moving the action along in an efficient manner. Magrath, Kinney and LaPaglia seem to want to present a complex Nixon, but a selfish character consistently complaining about being so misunderstood while believing whole-heartedly that he can do great things to help others isn’t exactly a new understanding of Nixon nor that multidimensional. Instead, the perpetual hunch LaPaglia physically gives the character is the only part of him that isn’t flat.

The moment of truth – the speech itself – features various asides, cutting away from Nixon to others. The purpose makes sense in today’s impatient theater and film culture: Who wants to watch a 30-minute recitation of speech. But the execution here is abysmal McGrath breaks-up the speech by interspersing the thoughts and comments of those watching it: Pat Nixon’s inner monologue; General Eisenhower and his wife watching at home; and the General’s campaign heads in their office, nervously trying to will Nixon to just resign from the campaign. These attempts at cut-aways are simply corny and whiny, and they actually detract from any good attempt at trying to recreate what it may have been like to witness this speech.

Checkers takes an interesting turn in the last scene, becoming more focused on Pat, the suffering wife who wants nothing more to do with politics and campaigns. “I’ll be beside you, but I can’t be with you,” Pat says to her husband as he tries to convince her that running this one last time will be a good thing. But she’s not buying it, and his reaction to her comment is the sole moment of emotional weight in the entire show. The credit must primarily go to Erbe, who in this final scene finally made me believe she was human even as I couldn’t determine for a moment why Pat Nixon loves and believes in this version of her husband as dotingly as she does.

I’m really not sure what’s going on with LaPaglia’s performance. I’ve always quite liked him as an actor, but it seems he spent so much time trying to get the cadence and physicality of Nixon correct that he lost the man. The accent is just weird. And unfortunately, it is all but impossible not to compare his Nixon to that of Frank Langella’s from both the theatrical and film versions of Frost/Nixon a few years back. What was so notable about Langella’s performances was that he stopped short of trying to mimic Nixon’s voice, accent and physical characteristics. He didn’t look much like the late president, and yet he captured what all audience members understood as his essence, and especially on the stage, he became Richard Nixon fully.

To be fair, Peter Morgan’s play is a far greater piece of writing than Magrath’s, so Langella had much more to work with. But I forgot that I was watching Langella play Nixon on the stage of the Bernard Jacobs theater five years ago, and in Checkers, I unfortunately never stopped seeing LaPaglia. Sometimes, great talent gets together, takes a big swing and produces a huge whiff. I really wanted to like Checkers. Nixon really wanted to be liked. Unfortunately, both the play and the real-life version of its central character were just too flawed to make that possible.