Sorry: The Apple Family has nothing to apologize for

In the program to his new play Sorry writer-director Richard Nelson writes, “It is my hope that these plays are about the need to talk, the need to listen, the need for theatre, and, I now add, the need to be in the same room together.”

The immediacy of theater sets it apart from the other storytelling- and performance-based arts like film and television. Every show is different, if only in minute ways. Every performance is ephemeral, specific to that moment in time and that audience. Once it’s over, it’s gone.

I have arrived late to the “Apple Family Plays.” Sorry (which The Public Theater has extended through this Sunday, Dec. 2) is the third of a fascinating four-play experiment-in-progress. Even without seeing the first two installments -- That Hopey Changey Thing and Sweet and Sad -- (as I haven’t), I enthusiastically endorse catching this show before it actually closes. Each play presents a peak through a window into the lives of one family on a day of national significance. That important date matches the play’s official opening performance. In the case of Sorry, the audience spends just shy of two hours with the Apple siblings and their uncle Benjamin in the early morning of Election Day 2012, and therefore, the play opened on Nov. 6 as well.

I don’t know how true this was for the first two plays, but Nelson obviously continued changing the script of Sorry all the way up to opening night. At least a few audiences saw this PublicLab production in previews (although I believe it’s schedule was altered due to Hurricane Sandy), but the play just as obviously becomes frozen in time as of that opening night.

Continue reading "Sorry: The Apple Family has nothing to apologize for" »

The Whale: Theater at its best as Playwrights Horizons does it again 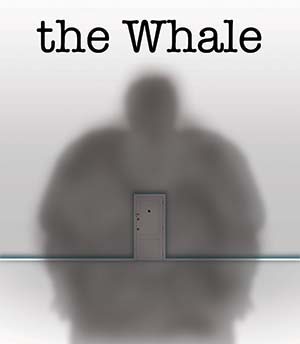 I don’t casually give standing ovations. Generally, I remain perfectly content to clap from my seat, even if I thoroughly enjoyed the just completed work. However, upon the final blackout of The Whale, I leapt to my feet to acknowledge the brilliant and award-worthy performance of Shuler Hensley, and to an even greater degree, the tremendous script from playwright Samuel D. Hunter. The Whale -- now playing at the Peter Jay Sharp Theater, Playwrights Horizons’s smaller, second stage -- is simply one of the best new plays I’ve seen in years. Period.

I never expected to type that sentence. I was more prepared for an evening of obvious metaphor from a play that focuses on a 600 lb. shut-in and bears the title “The Whale.” Yet I have not seen such a captivating and well-constructed play in quite some time; a storyline as lean as its main character is not; and a complete set of five dynamic multi-dimensional characters with complex relationships that all work on multiple levels. Led by director Davis McCallum’s tight staging, The Whale provides a nuanced and fully-formed exploration of love, shame, regret, self-destruction, religious guilt, reconciliation, redemption, control and longing.

Hensley’s Charlie began eating himself into morbid obesity after his partner Alan passed away. While we’re never told precisely how Alan died, the implication is that he essentially starved himself to death, making Charlie’s mode of self-destruction that much more compelling. Charlie now works nonstop as an online essay tutor and never leaves his cluttered apartment in northern Idaho. Charlie knows he has little time left due to regular bouts of debilitating chest pain and his increasing difficulty breathing. His only friend Liz (Cassie Beck) – a nurse who takes care of him – berates Charlie for not letting her take him to the hospital while simultaneously enabling his slow suicide by providing him with buckets of fried chicken and meatball subs.

Continue reading "The Whale: Theater at its best as Playwrights Horizons does it again" » 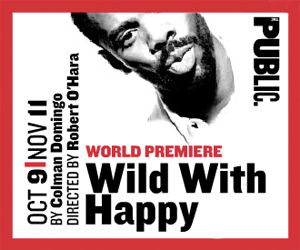 Oh, how I would love to be happy all the time! Wouldn't that be wonderful? For that very experience, vacationers spend thousands of dollars to visit the happiest place on Earth, Disney World. In so many ways, they leave the real world to enter an entirely different one, filled with multiple resorts, attractions, countries, malls and, yes, the Magic Kingdom, where every night is New Year’s Eve and ends with fireworks.

Yet Disney World is an illusion, as all those same vacationers discover when they realize just how many thousands they spent for four days and three nights hotel, food, park admission, airfare and all the other requirements to divorce themselves from life in order to become intimate with Mickey. Disney World is the fantasy life we can buy; it is an escape from the heartache, failure, sadness and loss we face in our daily real lives. This conflict between the fanciful dreamer and the cynical realist lies at the heart of The Public Theater’s current production Wild With Happy.

Colman Domingo’s play focuses on Gil, a 40-year-old gay struggling actor with a degree in English literature from Yale who lives in New York, slightly estranged from mother. He calls her by her first name, Adelaide. After a short prologue during which Gil (also played by Domingo) explains why he has renounced church, we learn that Adelaide has died, somewhat (but not 100%) unexpectedly. The rest of the show focuses on Gil’s attempts to deal (or, more accurately, not deal) with this loss.

Sunday Soapbox: My "fantasy" of how the Dems could sweep this election - a call to relinquishing leadership

In just two days, we will vote to elect a new president. But as I look forward at the next four years, it seems obvious that regardless of who wins the White House, true and new leadership is required even more in both houses of Congress. I have what I’m sure many would consider a naïve belief: The most powerful event that might change or determine voters' minds even in these 48 hours before the election has nothing to do with Barak Obama & Joe Biden nor Mitt Romney & Paul Ryan. Rather, a Democratic win could be had if only Nancy Pelosi and Harry Reid would announce that they each plan to step down from their respective leadership positions for the next term and support a new generation of Democratic leaders. Now that would be true leadership.

Conventional wisdom currently states that under either a President Obama or a President Romney, the Senate and House of Representatives will maintain the status quo: A Republican-led House that won its majority by complaining about all the laws Pelosi, Reid and their caucus counterparts “shoved down our throats” before it proceeded continuing to pass social legislation that remains unpopular with the majority of the nation; and a Democratic-led Senate with a majority that can’t pass anything due to an archaic and ridiculous rule (not constitutionally-based law, mind you) that allows for the possibility of 41 Senators who cumulatively represent less than 15% of the national population to kill any bill they like. (Roughly 80% of the 50 states have smaller populations than New York City, and yet, they all have two senators each.)

Continue reading "Sunday Soapbox: My "fantasy" of how the Dems could sweep this election - a call to relinquishing leadership" »