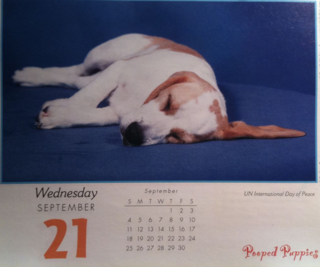 I have never been one to celebrate my birthday, at least not since my teens. I don’t precisely remember when I stopped regularly having birthday parties, but I do remember my last one: I had a party when I turned 30, precisely 10 years ago today; 10 days after the terrorist attacks of 9/11.

I had a bit of a nervous breakdown the night before. I felt stupid for having a party while my home of the previous five years and adopted city still reeled from the previous 10 days. I felt like I had wasted my 20s, and here I was, truly and unambiguously an adult, having achieved very little of what I had hoped and planned to by that point. I was scared of 30. And even though nothing would really change when the calendar moved from 20 to 21, on that night, I sat outside my apartment building, under the awning, watching the rain pour as silly tourists waited outside to get into Café Lalo. I'm pretty sure I cried. All for turning 30.

This year, I’ve thought about dropping the “0” and just deciding that I’ll be four. But that’s not a real solution.

And actually, I didn't have a new nervous breakdown about saying goodbye to my 30s last night. My 30s were not always kind to me, but they were mine. And I survived them. And sadly, that’s more than many can say.

I can celebrate my second Jack Benny birthday; or I can look at the beginning of a new decade; or I can look at this as the final year of the last one. I told myself nearly two years ago -- on new year’s eve 2009 -- that I was going to celebrate this birthday, even though, it’s not what I do.

Doth I protest too much? I haven’t had parties, but in this little nook of the web, visited rarely but totally public, I have managed to announce -- pronounce even! -- my birthday every year, without fail. Last year, I intended to start posting more. And in fact, while the last active post is from February, I’ve written several since that just never made their way to the interwebs. I found myself spending more time on each post and not wanting to send them out to the world until they were ready. But they never were.

And then, after 18 full months of unemployment, I finally landed a job. One that has virtually taken over my life, especially over the last six weeks or so.

By 2001, was I yet a New Yorker? Some say we all became New Yorkers on 9/11. I had been here almost five years. I had no direct connection to what happened at the World Trade Center that day. I knew none of the victims personally. I did not work in lower Manhattan. I had been down to Century 21 and walked on the plaza one week before, but that was the closest connection I had.

I remember that morning; I remember seeing the smoke from the towers on the television and saying to myself, “How are they ever going to be able to fix that?” I remember going to vote that day. I remember walking from my Upper West Side apartment down to my office at HBO. I remember my friend and co-worker Allison getting very scared when she saw people running out of the subway, wondering what might be happening under us.

But that’s it. My 9/11 story isn’t that profound, certainly not compared to so many of the others I’ve heard in the years since. And yet, as I examine my past decade, it is shocking how intertwined 9/11 has become in my life — starting with my involvement with the Tribeca Film Festival from its first year through 2009; to my 18-month job-hunt journey that culminated with my joining the staff at the 9/11 Memorial in April. Coincidence? Sure. Synchronicity? Maybe. If I believed more wholly in Fate, I would certainly need to consider its power.

And so my promise to myself to truly celebrate this birthday became more difficult due to the amount of time I found myself dedicating to helping thousands of others commemorate a very different anniversary. The past six weeks have been rewarding and fulfilling at times, but also extremely exhausting. I have worked harder than ever before -- including many years of late nights and long days at Tribeca. I have yet to wake-up and not feel like the dog from today's "Pooped Puppies" calendar page, pictured above. At least not since July.

I'm looking for a return to normalcy; my normalcy probably appearing somewhat abnormal to others. I anticipate getting there. And I'm trying to keep my promises to myself, so I'm still trying to celebrate what people keep telling me is this milestone.

I thank all of my friends and family who have contacted me already today. I have yet to plan any sort of party, but it could still happen soon. You know, so that my celebrating involves actual other people. That seems to be the social norm, right?

I have spent most of these birthday posts examining events that have happened on this day or offering birthday wishes to the many others -- more famous than I -- who share this day with me. I guess that’s one way that, at least for now, I’ll celebrate this birthday differently. I wish all of us September 21sters a great day, but this year, when it comes to this post, I’m keeping the celebration for myself.