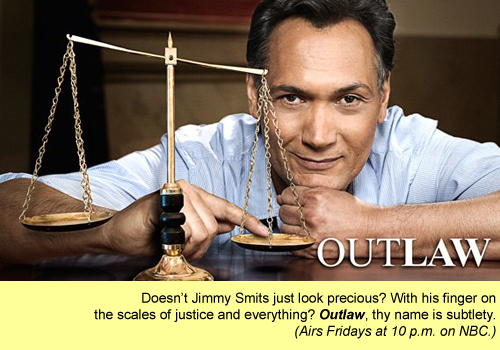 Earlier today, fans of NBC the world over rejoiced at the news that NBCU topper Jeff Zucker has finally stopped failing upwards. I'm sure he shall live comfortably for the rest of his years, and he will soon run some other sort of media company, but at least he will no longer be able to pursue his evil plot of destroying NBC. Besides, he managed to damage the Peacock enough during his tenure, rising through the ranks as the network that brought us the most provocative and entertaining television through the '80s and most of the '90s slowly dropped to last in the ratings.

Not to Zucker's credit, NBC's schedule this year does not appear completely horrific, but one interesting legacy project which in its own way exemplifies the poor decisions of the entire Zucker era premiered last week and has its second episode tonight. NBC's new Jimmy Smits-led show Outlaw arrived on televisions last Wednesday (Sept. 15) after the finale of America's Got Talent. I guess that was nice of them, figuring it might give Outlaw a fighting shot before it gets sequestered to the potential death-slot that is Fridays at 10 p.m. I'm sure that NBC hopes that a legal drama led by Smits might be enough to draw the older demographic still watching TV in that slot at least makes sense.

Of course, Friday was not always doomsday for series. For years, Friday night shows dominated the ratings. Dallas and Miami Vice—just to name two of many—both thrived on Fridays. But the TV landscape has changed, and unfortunately, if the pilot episode is any indication, Outlaw isn't going to lead the resurrection.

Which is unfortunate, especially considering the odd and unexpected collection of creative minds behind the series and its interesting if unrealistic premise: A conservative, womanizing Supreme Court justice (with a secret gambling problem) abruptly resigns the bench to defend the accused and find peace with the memory of his liberal activist father who recently died in an accident.

John Eisendrath, the series creator, executive producer and writer of the pilot, came to television prominence as one of the main creative forces behind Beverly Hills 90210. He also spent time on Models Inc., Felicity and Alias. The Irish writer/director Terry George (Hotel Rwanda, Some Mother's Son as well as writer of In the Name of the Father and The Boxer) helmed the pilot episode. And the series is part of NBC's leftover producing deal with Conan O'Brien's company, so the dissed late-night host about to open shop on TBS is another executive producer.

There might be a good series there, but the pilot points in the opposite direction. The case at the center of this episode was pretty by-the-numbers: a black man wrongfully accused of murder, ultimately cleared when Justice Garza (Smits) and his team discover that (drumroll, please… SPOILER!) the husband did it! In fact, far more interesting than the case itself is the casting of the innocent man: Rza of Wu-Tang fame.

The pilot fails primarily due to horrific writing. The hackneyed dialogue drops exposition like an anvil on Wile E. Coyote's head. Within the first five minutes of the episode, after one of Garza's clerks pulls him out of a casino because of the urgency of Gary Beals' (Rza) final pre-execution appeal, he encounters a (beautiful, natch!) young woman among several protesters outside. She tells him that Beals' "life is in your hands." Let the obvious eye-rolling begin:


Garza: Let me guess: ACLU.
Hot protester: Yeah, card-carrying member.
Garza: Before you go and burn a flag in protest, a jury unanimously convicted Greg Beals of killing a cop. Three appellate courts saw no reason to overturn that verdict, but perhaps you know better.
Hot protester: I might, if you'd let him have a fair trial.
Garza: I don't let people have anything. I follow the law.

I'm not sure why I didn't transcribe the next couple of lines, but Garza says something about how he's "Switzerland" and doesn't care about the individual players involved unless he sees relevant evidence. The hot protester continues:

Hot protester: Wow, would your dad be disgusted right now. He was a hero of mine. He was never Switzerland. He used the law to give people hope. To lift their spirits not shatter their dreams.

After another brief exchange with his law clerk, cut to Garza's apartment and the hot protester in post-coital dreamland in his bed. Garza, meanwhile, sits watching footage of his father talking about their relationship in an interview and how even though they hold opposite ideologies, they love each other. (A photo on the wall indicates Garza was nominated for the Supreme Court by George W. Bush.) Conflict confirmed!

The series does not lack potential, and the pilot does its job setting-up multiple narrative arcs that could prove provocative: Garza's gambling problem; Machiavellian Republican party operatives who hate him; some loan shark-types who might be after him; a clerk who's in love with him; and more hinted-at possibilities involving the rest of the supporting cast. However, none of those storylines will matter if the individual episode cases remain as uninteresting and the dialogue as poorly-written as in this pilot. I doubt Outlaw will ever become a long-term must-see for me, but I'll give it another two-to-three episodes before I pass final judgment.