The best film with a theatrical release I saw in 2009 was made in 1948. That’s not actually a knock on 2009, easily one of the stronger cinematic years this decade. But as I consider The Red Shoes to be among the top five greatest films ever made, I can’t ignore that the release of its pristinely restored version was a (if not the) highlight of my cinematic year. I’m only sorry I did not have the chance to attend the special screening at the DGA Theater to see it on a significantly larger screen than the one at Film Forum. Bruce Goldstein’s repertory programming at Film Forum is on its own almost enough for me to never even consider leaving New York, but oh how I wish their screens were significantly larger. 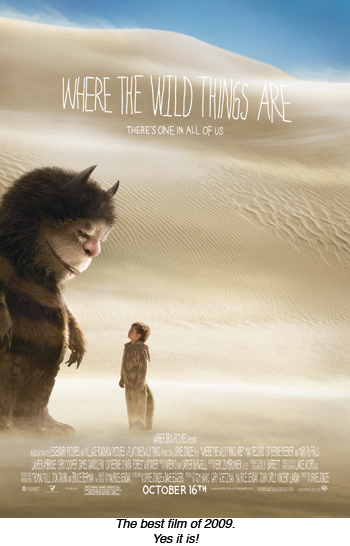 Yet I digress. My list of the top 10 films of 2009 completed in time for indieWIRE’s annual critics’ survey is now live at their site. I find creating lists to be simultaneously entertaining and frustrating exercises, but for me, the list simply can’t be the (only) thing. A list without an explanation might as well resemble a visually stunning plate of food that somehow lacks any flavor. So over the next two weeks, I shall explain my lists; the ones on indieWIRE as well as a few others. And so, first up: The Top 10 films of 2009.

Determining my top 10 this year was probably more difficult than any other year during these terrible Aughts, with the possible exception of 2004. Determining rankings (required by indieWIRE’s poll) proved particularly trying. I settled on my top 5 with relative ease and without internal argument. But after that, not only were there 10 or 20 films that convincingly deserved one of those lower-half slots, but they also kept hopping in and out of the list.

The difficulty in ranking combined with the pains of trimming illustrates a great year for film. However, it additionally proclaims a year in which the standout movies are mostly of such a high level that they simply don’t stand out from each other individually as much. I don’t mean to imply that the great films of 2009 aren’t unique and special; far from it, in fact. Rather, the voices that shouted, “Look at me” from screens this year were all so compelling, comparing most of them to each other in any attempt to rank them becomes quite complicated.

One special note about one title not on my top 10: Steve McQueen’s Hunger is one of the most unique and impressive achievements in cinema of the last couple years. I saw it at the 2008 New York Film Festival before it received a one-week release in LA. Because of that, I included it on my top 10 last year, as did 18 other participants of indieWIRE’s survey. However, it didn’t receive a New York release until this year, and it seems 10 critics voted for it this time around. If I hadn’t included it on last year’s list, it would definitely be on my current one, but I thought it inappropriate to list it twice. Where would it have placed this year? I’m not sure, and since I don’t have to make that determination, I’m not going to.

Of course, all of these exercises, especially when it comes to ranking, are more than simply subjective. And even in the days since submitting my ballot, I’ve thought to myself, maybe this film should replace that one; or, maybe this film should rank higher. One of the next posts will focus on the top films of the decade, which noticeably will not include any of the following titles. I’ll explain that deliberate choice further at that time. But for now, below is my list of the best of 2009, and after the jump, the reasons why:

That said, for me, the tremendous success of Where the Wild Things Are comes down to a relatively basic, but by no means simple, fact: Jonze created the best and most effective representation of childhood imagination, logic and rationalization that I have ever seen on screen; a magnificent example of how kids struggle to cope with and understand an incomprehensible surrounding world, and in the process of doing so, they begin to grow-up without even knowing it’s happening to them.

I plan to write more detail about Wild Things after the new year, but from the moment I saw it, and then upon seeing it again later the same week, I knew another film would be hard-pressed to take-over its place at the top of my year-end list.

The struggle in Summer Hours is never meant to be the top-of-your-lungs fighting of dysfunctional family films we all know-and-love, but rather, a simmering lingering despair or feeling of loss over the people, places and things that others do not value as much as we do, even when those others are members of our own families. The film also formally focuses on time passing within the modern family unit, and a generational disconnect more unique to a modern age in which family and community has become less tribal; no longer do multiple generations all live in the same house, much less the same village. The coming together twice a year at a grandparent’s house becomes a ritual, integrated into one’s existence, but still transient. Summer hours, not so different from office hours. They’re scheduled; they’re what you do; you may even miss them and maintain a sense of nostalgia when they’re gone.

I don’t want to monopolize this list with a discussion of this magnificent film, and it, too, is one I plan to discuss in greater detail later, especially after I have the chance to watch it a second time.

That’s 10, but 10 is nowhere near enough. Many of my next tier films spent time on this list, and for one reason or another, when push-came-to-shove, they got shoved. But just cause they’re gone from here, they’re not forgotten … rather, they’re up next.