« Pardon the Interruption: We shall return to normal (regular, even?) programming shortly | Main | Aaron’s Summer Vacation Part 4: The Conclusion--As if swimming, biking and running weren’t enough … »

Aaron’s Summer Vacation, Part 3: The day before crawls by in a flash

(This is the continuation and penultimate chapter of the Douglas Adams style-trilogy of posts I started more than a month ago. Pt. 1 is here; Pt. 2 is here. Just pretend those weeks never happened. I’ve been trying to do the same.)

I hadn’t had the best luck when it came to weather and endurance athletic events. In fact, 100% of the endurance athletic events in which I had ever participated were negatively affected by the weather. Now, to be fair, that 100% figure results from two out of two, so we’re not looking at the biggest sample here, and to call it a trend would surely be overstating the situation. But the fact remained: first was the AIDSRide meets Hurricane Floyd. And then, just weeks before the Westchester Triathlon, my warm-up and the only chance to actually experience swim-bike-run all together in a row at the Staten Island Triathlon (a “sprint” race), New York City had closed its beaches because of the weather the day before, and the swim portion was canceled. 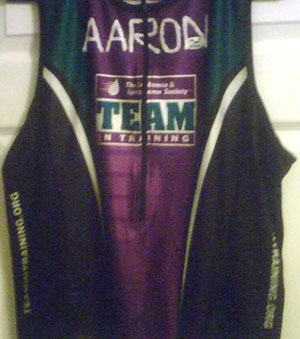 So when I took a look at the weather for the coming weekend and saw rain … RAIN … are you fucking kidding me with the rain? We had finally had beautiful weather for most of the weeks leading up to the event. It was almost like Autumn had decided to return us to a world of four seasons instead of the newer global warming reality of two: Hot and Cold. Meanwhile, a whole bunch of the TNT people with whom I had trained had already completed their Nations Triathlon on Sept. 13 in Washington D.C. The weather in D.C. on Sept. 13 was gorgeous. Sunny. Not too hot nor cold. Not humid. And they had a flat course. Sure, I had two extra weeks to train and a weather forecast telling me to go fuck myself.

Rain? I mean really? Wasn’t four months of training enough? Dozens of cumulative miles in the pool? Hundreds of miles on my bike? Over 120 miles logged in my running shoes? Swimming 1500 meters, biking 40 kilometers and running 10 kilometers? Back-to-back-to-back? The same morning? Having to wake up at 4 AM and be swimming shortly after 7 AM? Really? None of that was challenging enough? The powers that be had to make it RAIN ON ME!!!!!

I mean seriously. What. The. Fuck?

The next several days – which were quite lovely and sunny, by the way – I was obsessed with checking the forecast. And not just one forecast: which was better? Weather.com or Accuweather.com? (Generally, it’s the latter? Although in this case the latter was more optimistic … and more wrong.)

On Friday evening Sept. 25, we had to drop-off our bikes on the Upper East Side for transport to Westchester. From that moment on, the rest of the weekend was this oxymoronic slow-moving blur. All triathlon, all the time.

I got home and started packing, something I had intended to do days earlier, but as usual had left until the virtual last-minute. It seems like packing for a one night trip should be easy, but this was anything but. Not only did I have to pack normal clothing, I had to make sure I had everything (aside from my bike itself) for the event. That meant my bike helmet, flat tire materials, water bottles, biking gloves and sunglasses, bike shoes, running shoes, biking/running socks, running cap, wetsuit, swim cap, body glide, heart rate monitor, timing chip and its ankle strap, race belt and number, towels, plastic bags, sports drink mixes and food (and whatever else I’m now forgetting) … and that’s just for the race itself. I needed food for the room – breakfast, the most important meal of the day, would be even more important at 4 AM before heading out to set-up etc.

The next morning I met the rest of the New York City TNT chapter in Manhattan, and the bus took off shortly after 11:30 AM. The weather was cool, but still nice with relatively clear skies, and yet that nasty weather report wouldn’t go away, indicating overnight rain into and throughout Sunday morning – the sole time it was really unwanted.

We didn’t have much downtime after checking in to our room at the lovely (ahem) Rye Town Hilton. To get to our room was a nice little warm-up run: you had to leave the front desk, walk down a hallway, take an elevator up to the fourth floor before walking down another long hallway into a new(ish) wing of the hotel, at which point, after a few turns, you hit another elevator (or stairs) to go back down to the second floor, where we’d find our room … at the very end of another long hallway. You know how hotels have those folding pockets with slots in them to hold your room card keys, and often those pockets have a printed map of the hotel on the inside? This one did. But our rooms were either too “new” or enough of an afterthought that the map was missing this entire wing .

Less than an hour after checking-in, with barely any time to settle and relax, we were back on the bus, headed out to Rye Playland to get our bikes, check them in to the transition area and then do a little practice swim in the open water of Long Island sound, not specifically on the race course, but basically the same beach. The skies were getting greyer, the waters looked a little rougher, the air temperature a little cooler. We then did a little practice open water swim. Distance? No clue, but having not been in open water since an extremely difficult practice at Coney Island about a month prior, it proved valuable.

A return to the hotel, a shower, a careful cleaning of the wetsuit to get all the sand out, and next thing you know, it was time for dinner: a big, pasta and chicken party. Load up on those carbs, ya know. One of the things about doing an event like this with a group like TNT is that several people are there like I was, and several people are there with a much grander purpose, namely, supporting this event. So the dinner was meant to be inspirational as well: a video of people racing; stories of “honored teammates,” people who have battled various blood (and other) cancers and also have participated in these races; and of course, stories of people who lost their battles with these terrible diseases.

For me … I was tired but not sleepy. Anxious but mellow. At this point, I was more worried about falling asleep (early! By nine; we had to wake-up around 4) and waking up than anything else; about having everything ready for the morning; about not feeling rushed. I ate, I watched, I listened. 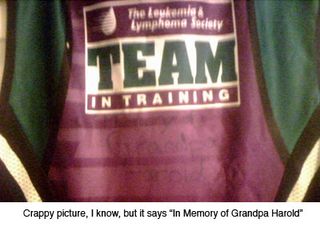 I used some white out to write my name on my tritop and a sharpie to write “In memory of Grandpa Harold” on the back.

My friend Cree (who went through this whole thing with me) and I returned to our room. We got everything ready for the morning. It was just about 9pm. The weather report was still crappy, but it hadn’t started raining yet. Cree and I each popped half of an Ambien to help us fall to sleep quickly. Then I decided to go to the bathroom before bed.

With a Murphy’s Law precision that tends to happen to me (I believe) more than others, I stopped up the toilet. Forget embarrassing: I had to go to sleep? But we had to be up at 4am, leaving before 5, and there was no plunger in the room. I (somewhat frantically) called the front desk, explained the problem and asked if they could send someone as soon as possible. I struggled to stay awake for the knock on the door. I felt guilty about keeping Cree up at all. 30 minutes later, I called the desk again, and apparently, ours was not the only room with problems that night. It seems that in Rye on a Saturday night at a hotel hosting no less than four weddings and probably only one maintenance person on duty, ASAP at 9pm is just under an hour.

The maintenance man showed, and five minutes later I was asleep. What seemed like five minutes after that, I was awake once again, but this time, I was just hours away from the whole thing being over. Cree was awake, and I asked him if it was raining: he was sleeping in the bed closer to the sliding glass door. “I don’t think so.”

Wow. Kudos to the Rye Town Hilton for creating a relatively peaceful sleeping environment. Those doors/windows are pretty soundproof because I walked over, slid the door open and as I stared into the dark trees and brush outside our room, I could have sworn I simply couldn’t see the waterfall that must have been right in front of me.