« SUMMER FOR CLASSIC MOVIE LOVERS | Main | NOTES FROM TRIBECA: FOLLOW MY VOICE ON DVD AND SCARLET ON CINEMA'S LOSS »

GET YOUR TAROT ON AND MEET KIMMI 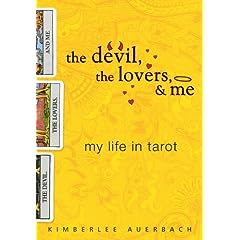 Believe it or not, even with my arse planted firmly in my couch or a movie theater seat, I actually read a lot too. Nevertheless, I rarely talk about books in this space unless said book has something to do with a film or a play. I suppose, in a way, this post doesn't necessarily stray so far from that pattern, but in a way, it's going the other direction.

Two years ago when I was covering the New York International Fringe Festival for Gothamist, I happened upon a one-woman show called Tarot Reading: Love, Sex and Mommy. It was written and performed by a woman named Kimberlee Auerbach, and all I really knew about the show was that I liked its promotional photo from its postcards and Fringe listings. I was also truly touched by and taken with the show, writing a very enthusiastic review for Gothamist. I was also quite simply fascinated with Kimmi because not only did I find myself identifying with many of her stories or, at least, the emotions emanating from them, but I was curious about this woman who was willing to present herself in such an open and raw manner yet without ever seeming to sensationalize anything.

So ... I contacted her and wanted to know if she'd be willing to do an interview, also for Gothamist. We talked for so long that I simply couldn't use everything in the "official" interview that appeared on Gothamist. In fact, there were quotes that just didn't fit there, but that I considered important and interesting enough to post here in this space; call it the bonus feature, I suppose.

Anyway, the memoir that Kimmi mentions in the interview is now actually seeing the light of day. "The Devil, the Lovers & Me: My Life in Tarot" hits bookstores today. I couldn't be happier for her, and I can't wait to read it. Meanwhile, tonight at 7 PM, Kimmi will be reading from her book at the Borders in the Time Warner Center at Columbus Circle. If you're in New York, check-it-out. If you miss it, she'll apparently be at the McNally Robinson store in SoHo on Sept. 19. And if you're somewhere else, check the book's MySpace page to see if she's coming your way. (That means you Angelenos for next week when she's at Book Soup.)