« YOU'VE GOT TO BE KIDDING ME | Main | ANCHORWOMAN: WHY DID THEY EVEN BOTHER? »

DIVO ALERT - JEKYLL: ONE OF THE BEST SHOWS YOU'RE PROBABLY NOT WATCHING 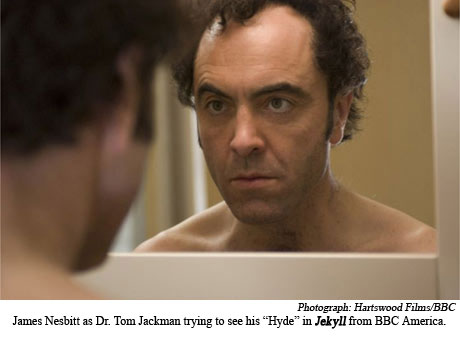 For anyone who thinks that this summer has presented a dearth of good television, you a) must not have actually been watching and, maybe more importantly b) definitely haven't been watching BBC America (Channel 106 on Time Warner cable.)

Among the several series I've been following on the Brit-caster is also one of the all-around best series I've seen this year: Jekyll is a modern reimagination -- a bit like a sequel, really -- of the classic "Dr. Jekyll and Mr. Hyde" story. It's a sequel because it imagines a world where the Robert Louis Stevenson novel was actually based on fact, and our main character -- Dr. Tom Jackman played brilliantly by UK TV star James Nesbitt -- is mysteriously a direct descendant who shares a certain quality with his ancestor.

Nesbitt's portrayals of both Jackman and "Hyde" are simply some of the best acting you'll see anywhere onscreen. Additionally, if you're like to stare at the stunning Michelle Ryan before she turns in to Jamie Sommers in the new Bionic Woman, here's an opportunity as she plays Jackman's assistant utilizing her natural British accent.

But the best reason to watch Jekyll is to see the creative and imaginative way Steven Moffat -- one of the best writers and show-runners working in British television, having also created their original version of Coupling as well as writing some of the best episodes of the new Doctor Who -- navigates this territory.

The show in its current state is actually more of a mini-series with only six hours worth of episodes. The final two hours air this Saturday night at 8 PM (repeated at 11), and originally, BBC America had a full marathon of the show leading up to the finale. Those first four hours are riveting, and I'm not sure why the channel changed its schedule so that they're only showing hour four before the finale. But you should be able to still catch the first three episodes via BBC On Demand (channel 1011 on Time Warner), and I highly suggest you watch. Or, if you miss it, you can always Netflix it when the 2 disc DVD set comes out in about a month.

It doesn't look like the series will continue beyond the original six, which -- although I haven't seen the finale and have no idea whether or not it would make sense to go on -- I would love to see. The creator and star are busy enough with all kinds of other projects, apparently, and according to The Guardian's TV blog, Moffat is already quashing rumors that Nesbitt will be the next incarnation of The Doctor following the end of David Tennant's reign in Doctor Who. Whatever. British television is a whole different world from ours, and much of it is tremendous. But if you want to see some of the cream of the crop, check-out Jekyll.