THE SUGAR CURTAIN: WHEN CHILDHOOD MEMORY CONFLICTS WITH ADULT REALITY 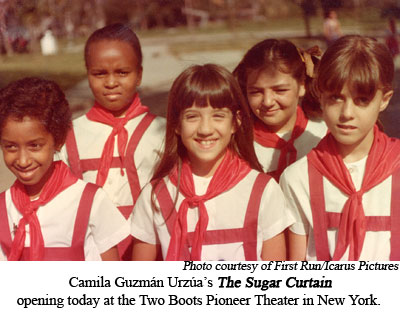 As I've mentioned before, watching submissions for Tribeca can often be a frustrating experience. We watch so many movies, and it's not that all of them are terrible by any means, but considering the very small percentage we can actually accept, it's much more pleasant and refreshing to see a must-show. Early in my viewing process, I popped in a film called The Sugar Curtain. I gave it a really high score, and my notes read as follows: "Really interesting look at Cuba from the young, post-revolutionary Cuban perspective. Considered pre-fall of USSR Cuba a utopia and yet once no more Soviet support, the curtain fell and there's been disillusionment ever since. Although seemingly, they still believe in the ideal."

I'm not actually sure why I even had the disc because a couple of our programmers had already seen it at San Sebastian and Toronto, and I discovered that the film had, in fact, already been accepted. And yet, I'm happy it had been given to me because otherwise, I may not have found time to watch it.

Director Camila Guzmán Urzúa makes her feature documentary debut with this fascinating insight into growing up in (and eventually out of) Cuba. She presents a society which has utterly failed due to Communism and authoritarian rule, but was formed on a foundation of ideals that many -- including herself, it seems -- still believe to be sound.

Guzmán Urzúa arrived in Cuba as a two-year-old and left in her late teens, returning for the first time over a decade later. This perspective allows the film to present something other than just social and political analysis of one of the smallest but politically influential countries -- thanks to Castro's continued defiance of the much bigger and stronger U.S. -- in the Western Hemisphere, if not the world. As someone not born until 1971 -- well after the Bay of Pigs and Cuban Missle Crisis, at a time when the primary national focus against Communism had shifted to Southeast Asia rather than off the coast of Florida -- I think Cuba has always held a more mysterious place in my generations consciousness. Fidel Castro may never be hailed as an icon, but Che Guevara became the symbol of revolutionary activity, appearing on hipster t-shirts, even if his disobedience was never necessarily civil and he helped put his then-friend in power. Yes, his name and image stands for something much different to most people now -- a more socialistic ideal than communistic -- yet history has shown that even the best of any Marxist philosophy has, at least to this point, regularly been corrupted by those who take power over it.

So what do members of my generation who grew-up in Cuba think? And even more interestingly, how does ones indoctrination as a child coupled with experience throughout growing up effect their thoughts later as an adult? These are the questions Guzmán Urzúa explores in detail, and they're fascinating. It's as if she constantly recognizes things that are simultaneously completely foreign. The power of the human mind, particularly coupled with a child's perspective and maybe imagination, is enough to make vivid memory and explicit reality at odds with each other.

By presenting interviews with childhood friends who have remained in Cuba, we see that the memory and the idealism remain even when the reality is recognized by those who haven't lived elsewhere. The Sugar Curtain works on several levels being both a personal and societal examination. Everyone in the film is conscious of the reality and hardships of their current situations, and yet there is still the longing for that dream of a society where everyone is healthy, happy, educated and fulfilling the promise of the ideals of their revolutionary foundations. This doesn't come from brainwashing or even indoctrination; it comes from a place of hope, and as Guzmán Urzúa illustrates, that hope doesn't disappear even when one is finally able to examine the reality with objectivity.