« EMMY PROVES IT TOO IS AN EXERCISE IN FUTILITY | Main | NOTES FROM TRIBECA: INTRODUCING THE SWAG BAG »

THE RENEWED POPULARITY OF A CAMP CLASSIC 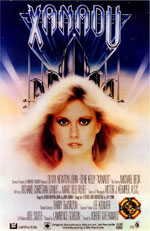 Apparently, I wasn't the only person with this idea. If you glance over to the left, you'll see that currently I'm "Netflixing" the third season of Rescue Me (I have three discs at home) along with the documentary The U.S. vs. John Lennon. But this doc (which I've wanted to see for quite a while) was not the next item in my queue, a film which had been available "Now" for quite some time, but suddenly last week earned the notation "Short Wait."

That's right: Xanadu -- the film that many people believe killed the movie musical as a genre for the following two decades -- is receiving a resurgence in interest due to the new Broadway musical adaptation which opened last week to pretty good reviews. I haven't seen Xanadu since I was a nine-year-old with a post-Grease crush on Olivia Newton-John, so I figured I'd watch the movie for kicks before heading to the theater. The wonderful playwright Douglas Carter Beane handled the adaptation of the book for the stage, and from what I've read, he's reconstructed the entire thing from the ground up. But I'm still curious to see that source material in all its 1980 glory.

Apparently, a lot of other people are too. Well, I guess maybe not "a lot." I have no idea how many copies Netflix has; maybe there are just like 10 of us in New York who are interested/curious and that's enough to make a run on their stock. Either way, if you're out there: please return Xanadu. My next selection will probably be sent from Netflix tomorrow! Thanks.

You don't have to wait! All the good stuff is on YouTube!

Yeah, I know. But I want the overall non-snippet experience! You know ... context! :-P

You do know, of course, that I am a huge fan of Xanadu. If you want you can come over and watch it. I'll sing along to the entire film.

Well, Aaron, if you ever make it out to Phoenix, I own a copy as well. It's just the greatest roller skating, big band disco Greek mythology epic ever filmed!