R.I.P. MICHELANGELO (CAN WE TAKE A BREAK, PLEASE?) 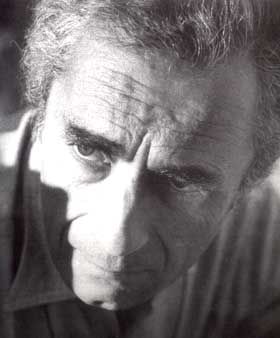 This is a bit terrifying. Let's leave aside Bill Walsh, Tom Snyder and Michel Serrault. I don't even want to think about what the news will be tomorrow, especially considering the number of French New Wave directors are still alive. Sunday, it was the Swedish Ingmar Bergman and now I wake up today to read that another of the world's most important filmmakers who had a direct influence on just about every film considered "art house" today passed yesterday. Sure, the great Michelangelo Antonioni at 94 was even older than Bergman, so again, it maybe shouldn't be a surprise and many probably thought he died years ago. Nevertheless, news of his death was a very unwelcome surprise this morning.

Antonioni was one of the first filmmakers to truly explore loneliness, solitude and alienation -- qualities that too many pretentious but not as talented directors try to present these days -- on film. He was also responsible -- along with Federico Fellini -- for changing the direction of the entire Italian film industry, moving away from the post-War Neorealism of Roberto Rossellini and Vittorio de Sica towards a more modernist -- and abstract -- form of storytelling. Like Bergman (and Fellini, for that matter), Antonioni cast such a great shadow over the rest of cinema that his last name became a fully descriptive adjective simply by adding an -esque to the end.

Antonioni was the first of the great Italian directors I ever paid attention to. I remember first hearing his name in high school. It was because of the musical Hair, which was my Sophomore year's Spring production. In the song "Manchester England" which introduces the character Claude to the audience, there's a line which goes: "Claude Hooper Bukowski, Who finds that it's groovy to hide in a movie/Pretends he's Fellini and Antonioni...."

Then, the summer after my first year of college, I started getting really into film, particularly that group of American directors who came of age in the late '60s and '70s -- especially Martin Scorsese and (at the time) Brian De Palma. I read lots of books about both, and all the De Palma ones discussed how Antonioni was this huge influence on him. Sure De Palma obviously idolized Hitchcock more than anyone, but his Blow Out is an obvious pseudo-remake of the Italian master's brilliant Blow-Up. I also was a huge Pink Floyd fan at the time, and as the band had written all the music for the bizarre and difficult but somewhat fascinating Zabriskie Point.

Blow-Up was the first film I watched of Antonioni's, and the first I fell in love with. Last year, BAMcinématek ran a series called The Vision That Changed Cinema: Michelangelo Antonioni, a three-week retrospective in which they screened most of the filmmakers work. It gave me an opportunity to see one of his earlier films -- Chronicle of a Love, an interesting mixture of Neorealism and American noir. The film is particularly interesting as an artifact of Antonioni's artistic development, showing the glimmers of many of his later themes within the more standard story structure one might expect from a younger filmmaker.

His greatest achievement, however, is arguably his alienation & relationship trilogy of L'Avventura, La Notte and L'Eclisse. Some may argue more for Blow-Up, Red Desert or The Passenger, but these first three films are the ones that truly launched Antonioni as an international sensation and established that "-esque." And they're each brilliant in their own way, changing the very method of utilizing narrative -- when else does one see a main character disappear only to be totally forgotten and have it all work like in L'Avventura or ending a film with the succession of images and lack of resolution yet multitudes of emotion and meaning as in L'Eclisse -- and expressing human interaction and emotion.

Unlike Bergman, Antonioni hadn't worked consistently for most of the past 30 years. His last masterpiece was The Passenger, and that was in 1975. His last film was a segment of the omnibus Eros in 2004.

But also like Bergman, Antonioni's work lives on. (Unlike Bergman, Criterion only has two of his films in its catalog: L'Avventura and L'Eclisse, but both DVD editions are phenomenal, and most of his films are available on video.) And even if he had not worked for years, it's always sad (and reflective) when someone of such importance is lost and the knowledge of the physicality of his mortal and earthly presence is gone.

It must be hard to be Italian and carry a name like Michelangelo. It presents a tremendous height to which one might aspire, especially should that person enter a field of artistry and creativity. Antonioni arguably succeeded in his challenge, making films that -- like the statue of "David" -- will forever be considered among the greatest and most important in the history of cinema.

R.I.P. Michelangelo. You will be missed.