« NY FILM FESTIVAL: LITTLE CHILDREN -- PROVING THAT AN UNSUCCESSFUL ADAPTATION CAN STILL BE A MILDLY SUCCESSFUL FILM | Main | THE WEEKEND AHEAD: MUST-SEE DEPARTED, LIFE EXPERIENCE WITH 49 UP AND MORE NEW YORK FILM FESTIVAL »

SHORTBUS: HOP ON BOARD FOR A MOVING AND EMOTIONAL RIDE (YES, "RIDE" ... I KNOW) 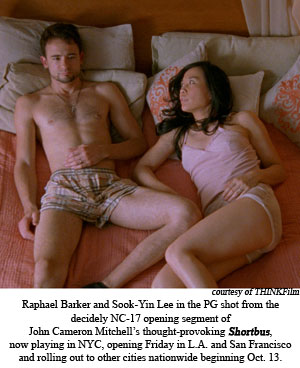 "Shocking" is one word that will likely appear time and again as people describe and critique Shortbus, the new film from John Cameron Mitchell, who after creating a smash Off-Broadway musical hit with Hedwig and the Angry Inch, reinvented the show for a virtually flawless film adaptation as his movie-making debut. With Shortbus, Mitchell decides to push the envelope even further than taking a German transsexual's cabaret rock show and turning it into a full-fledged film epic, but the only thing that really proves shocking about Shortbus is how relatively successful he has been. Although it has its flaws -- most notably a final sequence that seems to undermine everything that has come before it in the film -- Shortbus is no sophomore slump. Rather, it proves that Mitchell is one of the most creative, daring and innovative filmmakers on the scene today, indie or otherwise.

This struggle for an interpersonal understanding and connection is at the very heart of every character and relationship in Shortbus -- gay, straight or other. Sofia (Sook-Yin Lee) is a couples counselor/sex therapist who has never had an orgasm but consistently fakes them rather than going through any kind of her own sex therapy with her husband, Rob (Raphael Barker). Severin (Lindsay Beamish) is a lonely young woman whose longest "relationship" is with the wealthy young client she whips and berates. James (Paul Dawson) and Jamie (PJ DeBoy) are a gay couple who love each other but decide to bring a third party into the equation; each of them have different reasons for doing so, particularly James who can't seem to reconcile his own internal turmoil with how much he truly loves his partner. All of them work and live in a post-9/11 New York where nobody seems certain of the future or their places in the world. Through their sexual activity, they hope to discover intimacy and to feel, and yet, while they may have a good time, they don't necessarily connect. It's as if everyone is now a grown-up with a body and a sensuality but none of them actually know how to get the things they want as an adult -- the things they've always wanted. As one character states, "I look back at the things I wrote when I was 12, and I'm still looking for the same things now."

There's also a relative selfishness inherent in each of these people. James is putting together a video diary for Jamie about their relationship, but his ultimate reason for doing so is really an attempt to alleviate his own potential guilt. Sofia doesn't want to work with her husband on finding her own orgasm because she doesn't want to make waves, and yet, she goes on this journey to figure out how to fix her problem. Along the way, she finds a somewhat kindred spirit in Severin, but when the two of them find themselves together at a party, the up-until-now very understanding Severin loses all sense of place and partner in order to fulfill her own immediate need.

Severin and James are probably the two most interesting characters. Sofia's Odyssey to Orgasm gets a little tiresome by the end, but Severin's internal conflicts of emotion and character are fascinating. She's a wallflower who has difficulty expressing herself to anyone, but she makes her living by dominating others. Meanwhile, James expresses his closed-off feelings through his own sexuality, at one point explaining that he's never been fucked, a fact that ultimately plays a crucial role in his overall emotional development.

The title "Shortbus" refers to a weekly salon held in a Brooklyn loft hosted by Justin Bond (playing himself), an environment he describes as "anything goes. Everyone comes." This setting is where all our main characters, and many others, come together to further explore their sexuality, their relationships and their ability to connect with others. It's the shortbus because this is where all of societies most individual "freaks" or "outcasts" can come and not feel alone, just like the bus that brings the special needs kids to school. The use of this set piece is one of the film's strengths, but it is also the element that holds Shortbus back from truly soaring to the same heights of Hedwig. The themes of the two films aren't so different from each other, but where Shortbus goes wrong is in its finale – an epic party sequence. Hedwig actually ends with a similar setting, but the song and the scene don't undermine the argument the rest of the film has made.

In Shortbus, after everything we've gone through with these characters (especially James), the film ends at a Shortbus salon taking place during a New York blackout, a hedonistic free-for-all led by Justin Bond singing "We all get it in the end," which aside from its obvious multiple meanings (at least in this film), seems to indicate at the most basic level that we're all fucked. In this world, at this time, there's nothing we can do, so lets have fun. Let's give pleasure and receive pleasure. Let's come together in a physical way, creating so much passion and energy that we can literally relight the city because if we're fucked anyway, we might as well fuck ... anyway.

Personally, after experiencing the deep emotional relevance of the rest of the film, even supreme cynic that I am found this cinematic climax to be too much of a contradiction. Every one of our main characters actually has grown-up and arrived at a better place than they had been at the start of the film, even if everything isn't perfect. There's nothing wrong with just having fun, but at the end of a film that in part is makes the argument that graphic unsimulated sex in a movie can be a useful storytelling device without necessarily being gratuitous while also exploring why it's so much easier to feel alone than to feel loved no matter how many naked bodies are piled on top of you, we all really do get it in the end, but not necessarily in the best way. Still, while the denouement may be disappointing, it doesn't ruin the film, and copious copulation aside, with this shortbus, you'll want to climb on board.

Hey, this is an excellent review. I'm looking forward to seeing this flick.