NY FILM FESTIVAL: PAN'S LABYRINTH -- MAGICAL REALISM MIXED WITH RATIONAL FANTASY FOR A MAGNIFICENT CONCOCTION AND ONE OF THE BEST FILMS OF THE YEAR

(This post began as a continuation of the previous one, hence the oh-so-eloquent flow, or rather, the reference to something not included in this same entry.) 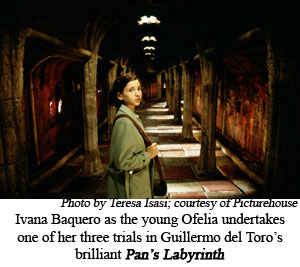 Even as difficult as it is for me to say that I liked or disliked Inland Empire, it is quite simple for me to shout hosannas expressing my immense love for and awe in both Korean director Bong Joon-ho's phenomenal The Host and Guillermo del Toro's post-Spanish Civil War fantasy fable Pan's Labyrinth, which screens this Sunday evening as the NYFF's closing night film and Picturehouse will release in theaters on Dec. 29. Del Toro is best known to American audiences as the man behind Hellboy and Blade II. I didn't love either of those, but at least they helped me forget the god-awful Mimic. None of those films, however, prepared me for his much smaller but more emotional and interesting The Devil's Backbone, which I only finally saw recently. And yet, none of his work at all has come close to the major achievement of Pan's Labyrinth.

Told through the eyes of 11 year old Ofelia (Ivana Baquero), del Toro's film puts a gleam in the eye while touching the soul. Although the story takes place against the backdrop of a very specific period of history -- near the end of World War II as Spanish revolutionaries continue to try to fight against Franco's fascist regime even though the Spanish Civil War "officially" ended five years earlier -- the themes themselves are universal. Innocence and thoughtful disobedience are the subjects with which del Toro concerns himself and us, and he does so by taking us into a world (or multiple worlds, in fact) that are simultaneously enchanting and horrific, exciting and monstrous. Not unlike Lynch's fluid shiftings of realities, Pan's Labyrinth presents us with a real world and a fantastic one only seen and experienced by Ofelia. As the story continues, these two realms begin to intersect more and more, but even when they converge completely for Ofelia in the end, they still remain separate for the rest of us.

The idea that children retain a greater sight for truth thanks to their innocence is not a new one in storytelling or filmmaking, and in the tradition of classic fairy tales, del Toro explores this idea expertly. Ofelia is nearly fearless, not because she does not recognize the dangers in the world, but because she wants to empower herself and never wants to find herself in the same position as her mother, Carmen: marrying a man and having his child simply because she believes she has no other choice. Carmen's new husband -- who she wants Ofelia to call "father" even though the girl never will -- is Captain Vidal, a literally monsterous and inhuman army officer determined to find and exterminate the rebels in the forest. As much as Ofelia fights against her real world environment, Vidal is specifically a product of not fighting against his. His father was a general who died when Vidal was a boy, leaving only the lasting impression that dying in battle is the only way to truly be a man. But del Toro consistently reminds us that although Vidal may be a man, he's barely a human. Moreso than any of the inhabitants of Ofelia's fantasy realm, Vidal is the monster who won't die. Stabbed, cut, sliced ... he continues. The scene that will make you squirm more than any other is not Ofelia crawling around in the muck with roaches and tree beetles all over her but rather the one in whcih Vidal gives himself stitches and the camera makes us watch, and watch ... and watch.

The film's primary focus concerns questioning authority, a decidedly anti-fascist theme and not necessarily that complex, but in del Toro's hands it contains a certain elegance. It's not only Vidal's brutality, and even the authoritative force he answers to, that must be questioned, but even the fairies and creatures driving Ofelia. Being led by one fairy into a mysterious and magical labyrinth, she meets the faun Pan who tells her she is really a magical princess and must complete three tasks in order to regain her immortality. During each task, Ofelia must make decisions for herself, ones that go against the very directions given to her by the faun and the fairies, yet it is through this thoughtfulness, questioning and personal action that she succeeds.

Although the story details a period now 60 years past, it happens to also be incredibly topical in relation to modern world events. At one point, Captain Vidal states that the rebels think that everyone in Spain is equal, but they don't seem to recognize that they're incorrect because the war is already over and they lost. This combination of superiority complex and blind faith in authority isn't so different from what we see here in our country and around the world -- such as our President declaring that his tiny majority win in 2004 gave him "political capital" thereby allowing him to continue his policies without learning from his mistakes; or the philosophies of fundamental Islamists who seem to believe there is no place on this Earth for anyone but themselves in their purist form. The cliche states that history continuously repeats itself. The situation in Pan's Labyrinth manages to expose the truth in such a cliche by simultaneously showing us a distant historical world that seems incredibly familiar, even to those of us who have never visited Spain or studied much of its history.

Del Toro's combination of style and storytelling is at its peak here. There is not one ounce of fat in this film, and every single shot services the overall picture. All the main characters are extremely well-defined and compelling, and it's literally impossible to take one's eyes (or ears, for that matter) off the screen. Giving away the climax of Pan's Labyrinth would be criminal, but it is notable to say that the film's conclusion led me to many conflicted emotions and judgments. Is del Toro saying, even a little, that a child's fantasy world is more important than the real/mortal realm? Is tragedy less tragic in the face of fantasy? The one thing you can be sure of is this ending would never have come from a $100 million studio film, and that's part of why it is so affecting. Pan's Labyrinth is, quite simply, one of the best films you'll see this year and a perfect example of everything a movie should be.

The same can be said for The Host, another picture which explores genre filmmaking -- in terms of a monster movie -- combined with emotional family drama and political discourse....

You're doing some really fine work here, particularly considering the number of flicks a film festival throws at you. Much rather be reading your accounts than any I've seen in papers or mags. Keep bringing the pain.