« WHILE I WAS OUT | Main | MISCELLANEOUS MISCELLANY: A LITTLE HOUSECLEANING »

OH TO TORTURE MY SOUL AND MY EYES 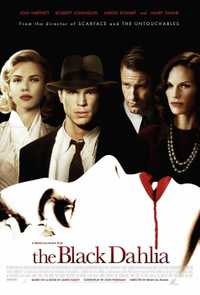 OK, so maybe that was a brief false start. But we're not talking about it; we're just moving on.

So a couple years ago, I wrote this post mentioning how dismayed I was by news of Brian De Palma's directing and casting for The Black Dahlia, an adaptation of the James Ellroy novel, which happens to be one of my all-time favorite books. Then in December, as more casting news trickled out, I decided to write this love letter to Brian D., which, thanks to a few comments, brought upon this "comment on the comments" a couple days later.

I mention all this because The Black Dahlia re-entered my cinematic world before Miami Vice a week ago (here's the trailer), and I don't know if I have ever both anticipated and dreaded simultaneously like I do this one. (IMPT REQUEST: I would love to read a copy of this script. I guess the easiest thing would be to email Josh Friedman who wrote it, but ... I'm lazy. Does anyone have a copy of the screenplay, close to shooting draft version? Or actually, I'd love to see both an early Friedman draft and a later shooting script. Yes ... I'm obsessed. Hence my love for the book! If you know how I can get my hand on a copy, please contact me.)

I'm not going to repeat everything I mentioned in those earlier posts. I also don't know that I completely agree with myself anymore about much of my casting criticisms. Of course, at the time, the role now played by Aaron Eckhart was to be either Mark Wahlberg or (ugh) Paul Walker. Eckhardt is a better actor for this role, although I still don't know that I consider him a perfect fit. Scarlett Johansson and Hilary Swank are both talented enough to do something interesting with their roles, and having seen the trailer, Mia Kirshner (whose casting I always liked anyway) is absolute perfection as the Dahlia herself, Elizabeth Short. 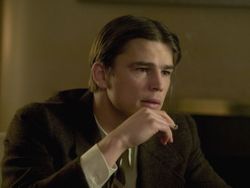 But woe's me, Josh Hartnett, upon whose shoulders and squinty-eyed-acting-non-abilities this whole story truly rests. The guy is an emotional sieve, and nothing in the otherwise gorgeous trailer encourages me otherwise.

I don't put much stock in trailers in general. As I also wrote in late 2004 (wow, was I prolific then, huh?), teasers are quite aptly named. They're just marketing tools, so obviously they're going to look as good as possible. The trailer for The Black Dahlia seems to do a reasonably good job of representing and selling the movie. De Palma has certainly created a lush and visually exciting world, a representation of 1940s Los Angeles that I'm sure will ooze with noir elements and be as exciting, breathtaking and seemingly realistic as his 1920s Chicago was in The Untouchables. But dammit if Hartnett doesn't come onscreen to ruin it ever other shot. 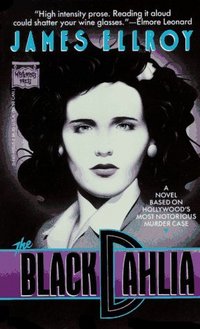 I really do hope The Black Dahlia is a return for De Palma. I want this movie to be not just good but beyond great. It is a masterpiece of crime fiction that just happens to be inspired by the most tantalizing of unsolved cases. I encourage anyone and everyone to read Ellroy's novel and to do so before seeing the movie only to experience the story with a completely untainted and prejudiced imagination. But as excited as I as to see little bits of these characters on screen, I still can't help but feel that ultimately, I'm going to be disappointed because ultimately, as I've written before, I've utterly lost faith in De Palma as a storyteller. It's scheduled for release on Sept. 15, almost exactly a week before my birthday. Maybe I'll get a magnificent present from De Palma -- a film that lets me rejoice in its greatness rather than rant through my disappointment. I won't count on it, but I guess for now, that's what I'll wish for. On the other hand, maybe if I watch the entire film while squinting -- just like Hartnett -- none of it will be so bad after all.

As much as we can hope this will be a good film, I really do not believe that with two out of the three leads being vacuums of talent the film has a chance. I love this book as well, but I am reluctant to go to the theatre to see it. It will most likely just make me angry and sad.

Could someone tell me whose dick Josh Hartnett is sucking to have his career?

Well, I think only one of the leads is said vacuum, and I maintain some small degree of hope.

And Hartnett is dating Scarlett, which of course only makes me hate him more ... like back in those Rocketeer days of Jennifer Connelly and Billy Campbell. Even though, at the time, that was much more age appropriate.