« CHRIS ROCK ISN'T GOING TO BE WEARING A BUNNY SUIT ON OSCAR NIGHT | Main | LETTERMAN'S HEARTFELT TRIBUTE PROVES WHY HE, NOT LENO, IS THE REAL LATE-NIGHT HEIR »

A 25TH BIRTHDAY PRESENT TO US: THE REAL BOXING CHAMP 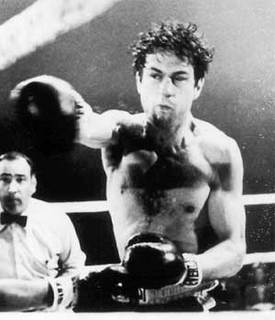 It's January, which means that unless you're catching-up with the major film awards contenders, your choices at the cinema become more and more limited by the week. January brings the dregs of theatrical releases, the major studios relative throwaways that most likely would flop against most good competition the rest of the year. But this weekend, if you live in New York, there is a release starring the great Robert De Niro that is absolutely required viewing.

No, I'm not talking about (or judging) Hide and Seek. Rather, opening at the Ziegfeld Theater today is the 25th Anniversary re-release of Raging Bull. It doesn't matter if you've seen it before – well, except if you haven't, what the hell is wrong with you? Here's a chance that rarely comes along anymore: to see one of the best and visually most beautiful movies ever made projected the way it was meant to be onto one of the biggest and best screens around. I don't care how many thousands of dollars you can afford to spend on a home theater system with a big, flat screen and professional sound system; and I'm sure the transfer on the brand new two-disc special edition coming out in two weeks is as good as can be. But all that money later still won't buy you the experience of seeing Martin Scorsese's stunning film like the $10.50 that will get you into the Ziegfeld and put you in front of that gigantic screen.

In the new issue of Sports Illustrated, there's a story by John Schulian called "One Tough Baby" (avail only to SI mag subscribers) about Clint Eastwood's current critical and Oscar favorite Million Dollar Baby. Under the headline on page 66, it says, "It may be the most troubled of sports, but boxing still packs a punch in Hollywood. The Latest fight film, Clint Eastwood's Million Dollar Baby, just may be the greatest ever."

No it isn't. I'm not an MDB hater like some others, but as good as MDB may be, it is most definitely not the best boxing film ever. That title goes to Raging Bull. Even if MDB does accomplish what Raging Bull couldn't, namely a win on Oscar night (Robert Redford and his Ordinary People took hom the Best Director and Picture prizes), Marty and Bobby can still kick Clint's and Hilary's asses any day. Go see for yourself at the Ziegfeld this week. There's no good reason not to, and while rep houses may screen the film repeatedly over the years to come, the opportunity to see it again on a screen the size of the Ziegfeld's may not be for another 25 years.

If only "Raging Bull" was really as good as we wanted it to be.