WE'RE OBVIOUSLY NOT WITH THE BAND 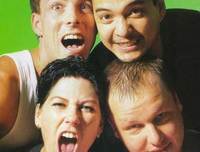 So last night was the final culmination of a decade-plus desire of mine – to finally see the Pixies live. The four older people (they don't look quite like this photo anymore -- all the guys' heads are shaved bald and Frank Black is more portly than ever) up on stage at Hammerstein still manage to rock pretty hard, but as the Thigh Master mentioned yesterday, their stage presence is pretty much non-existent with the exception of a small bit here or there and Joey Santiago's extended guitar/pedal exhibition. It's a blast to hear all those songs, and most of the time they're as fast and loud and energetic as ever.

Still, after the Guided By Voices show last week and Ted Leo Saturday night, I was actually a little bit disappointed. Of course, I attribute a great deal of that to the relative hell of Hammerstein Ballroom (at least compared to Irving Plaza and Bowery Ballroom). The sound was pretty muddy all night long, and the mic levels on both the Pixies and their opening band Broken Social Scene were way too low. The cavernous inside of Hammerstein just made the loud music (especially the heavy bass rhythms) echo and reverberate even when the floor and both balconies were jam packed with people. And we were right in the middle of the open sardine can known as the main floor. We should have had really good positioning, not too far from the stage at all, but unlike almost any smaller venue, it was still difficult to see the people on stage (which should be at least a foot higher).

Don't get me wrong; I don't regret going or anything, and hearing live versions of "Debaser," "Mr. Grieves," "Gigantic," "Tame," "Monkey Gone to Heaven," "Wave of Mutilation" (slow and fast), "U-Mass," "Bone Machine" and others (strangely no "Into the White" which I've heard on recordings from other shows on this tour) was great. But between their very workmanlike progression through all the songs (they played for about 90 minutes which just flew by) and the discomfort level of not always being able to see even from just 20 feet away from the stage, it wasn't the absolute best evening.

Something kind of funny happened earlier though....

My friend and I decided to meet at the elegant Tick Tock Diner on the corner of 34th and 8th to grab a quick bite since it's so close to Hammerstein. We walk into the place around 7 PM, and taking up two large booths right across from us are a bunch of indie rock hipster-looking types. One of them gets up, says bye to everyone and leaves, and the rest of them left about 10-15 minutes later. We didn't think much of it, other than me making a comment to my friend when we walked in, "Hmmm, I wonder who here tonight is going to see the Pixies."

Little did we know. Inside Hammerstein, the lights came down and onstage came Broken Social Scene. First of all, let me just say that they were awesome. I had only listened to them a few times before, but I've been playing You Forgot It in People and Bee Hives almost nonstop today. They were really great. I wish I was seeing them tonight at Bowery Ballroom because I'd be fascinated to see how they cram those 10 people onto such a smaller stage.

Anyway, a guy steps up to the microphone, and I realize that it's the guy from the diner who left the booths before everyone else. Then I notice that the bass player looks very familiar. Then a woman comes out, and I recognize her. And a guy playing maracas comes out and I recognize him. And I keep turning to my friend and saying, "He was there too." So basically, the entire band was having dinner before the show at the Tick Tock Diner. Hey guys … you rock. Sorry we didn't recognize you!