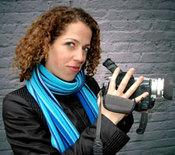 Today is the final day of Hannukah (at least until sundown), and in honor of my tribemates, Lily (an honorary Jew) and I present a Gothamist Interview today with a true Heeb. But Nancy Schwartzman is much more than simply the creative director of the great "New Jew Review" Heeb Magazine (wait, what did you think I was saying?); she's also a filmmaker and an activist. Currently, she's in the final stages of production on her documentary called A Woman Who Went Out, a film about Nancy's trip back to Jerusalem to confront the man who raped her there four years ago. Recently, Nancy has also spent a lot of time and effort creating NYC-RapeMap.org, an organization and web site (currently focused on Williamsburg and Greenpoint, but planning to expand throughout all five burroughs of NYC) dedicated to helping women find safe routes of travel, know where violent attacks have occurred and create safe havens for women and pedestrians in local businesses around town.

Nancy was also the main creative voice behind Heeb's fantastic satirical (and controversial) response to Mel Gibson's The Passion of the Christ when she directed a photo essay titled "Crimes of Passion" for the magazine's February 2004 issue. How she finds time for all of it (and a day job) is beyond me. Give Nancy's interview a read, and I'm sure you too will see what an intelligent, compassionate, driven and dedicated woman she is.