YOU DIG!? YOU SHOULD! 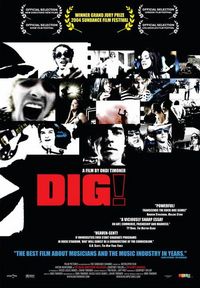 2004 has become the year of the rock doc. Overall, documentaries have attained some crossover to mainstream appeal over the past couple years, but this year alone we've already had Metallica: Some Kind of Monster and the still-playing End of the Century: The Story of the Ramones. Now we're being rewarded with a third film, this one telling the story of two bands with less notoriety but whose story is just as compelling. DIG! won this year's Sundance Film Festival Documentary Grand Jury Prize, and after having the chance to see the film Monday night, I can understand why.

Let me just say up front: go see this movie. Go see it this weekend. At least if you're in New York (at the Sunshine) or LA (at the Nuart). I don't say this because Palm Pictures was nice enough to let me into the premiere (and party after – Red Stripe, yum); I've been to plenty of screenings that I happily and enthusiastically pan. (The Brown Bunny anyone?) But DIG! is an eminently watchable film, and a perfect example of what makes a great rock documentary. More importantly, though, this is the kind of no-budget indie film that any movie lover should want to support and encourage, and the only way to do so is not just to buy a ticket but to do so on the movie's opening weekend. For better or worse, the future expansion to other cities will be heavily dependent on how the film does in New York and LA this weekend. If there's box office, there's buzz. And if there's buzz, other cities will get it, and the film can receive the attention it deserves.

Besides, what else are you going to see this weekend? Yeah, I'm anxiously awaiting an opportunity to go see I ♥ Huckabees (thanks low culture) too, but you can see that second. On Sunday even. And other than that, if you're incredibly excited to see Ladder 49 or don't feel like you can wait a couple days for Shark Tale, well you need some help. Rush out to DIG! first.

DIG! is primarily the story of Anton Newcombe, the frontman behind one of the most prolific bands of the last decade, The Brian Jonestown Massacre. Who, you say? That's right … BJM has never quite attained that crossover mainstream appeal or even major indie success, although their fans are rabid and consider Newcombe to be a musical genius in the mode of Lennon or Dylan. Although they've released roughly an album per year since 1995, if you're not already in the know, you probably haven't heard their music. (I basically knew the name but nothing about the band). Some of their biggest fans were also, for a time, their closest friends – at the beginning of the film, Newcombe tells the camera that he's planning a revolution in the world of music, and side-by-side with BJM will be this other band, The Dandy Warhols. Unlike BJM, The Dandys have experienced a lot of success in Europe, and you might recognize a few songs such as "Not If You Were the Last Junkie on Earth," "Bohemian Like You" (which was featured in some car commercial I'm forgetting), and most recently "We Used to Be Friends" which was heard on an episode of The O.C. this season. The Dandys, and especially frontman Courtney Taylor, were good friends and big fans of BJM. Dandy Zia McCabe at one point even calls BJM as important to the late '90s as the Velvet Underground were to the last '70s.

A funny thing happens during the seven years that filmmaker Ondi Timoner spent following around both bands with a camera: the prolific, immensely talented but also self-destructive Anton managed to chase away many of his closest friends and all his bandmates while the Dandys became a tight, and dare I say "responsible," musical act who kept finding a little bit more success with each tour and album. What happens in this story is what you might expect: Anton and BJM's envy of Courtney and the Dandys becomes apparent even as they refuse to admit it except for in songs like "Not If You Were the Last Dandy on Earth." And as Anton starts to act up, the Dandys begin to distance themselves.

The one thing that never changes is Courtney's (and his entire band's) awe and respect of Anton's talent, and that's where the strength of this movie lies because we all love to see the stories of the "mad genius" play out. If you went to see this film for the music alone, you'd walk away quite happy. The Dandys are fun, but BJM really is something special. I've immersed myself in several of their albums over the past few days, which isn't that difficult to do since all of them – as well as some live performance recordings – are available for free download via their website.

This fact alone is a perfect example of one of Anton's main eccentricities: illustrated over-and-over in the film is Anton's inability to let success find him and the band without doing something to fuck-it-up. He lives in an idealized utopia of his own creation in which his music is a gift to the masses, not a commodity for him and his cohorts to live on. Hey, it's all the better for us, because some of these records are phenomenal. (I've been spending a lot of time with Their Satanic Majesties Second Request.)

Timoner apparently had over 1500 hours of footage to cull through for this just-under 2 hour film that sucks you in with its amazing energy at the beginning and doesn't let you go until after Anton is arrested for kicking an audience member in the head, placing an extreme physical manifestation on his explosive personality as a capper to the entire story. One walks out of DIG! wanting to see more and eagerly anticipating the DVD release, if only to see additional sequences featuring BJM tambourine man and jester Joel Gion who is absolutely hysterical and has become crush to a few of my favorite female bloggers.

But Timoner's strength is in piecing the story, as it is, together into a very coherent, and relatively complete, narrative. The only slightly confusing element is the timeline: sometimes it seems like long periods of time have passed and it's been maybe a few months, and the concurrent activities of the two bands is not always clear. Ultimately, this is a minor issue that only really hit me after the whole film was over. Timoner's affection for both bands and its members is apparent in every shot because even the scenes that blur the line between comical and horrifying (the melee at The Viper Room in LA that destroyed any chance of a BJM deal with a major label; Anton screaming and shoving his ex-girlfriend, basically throwing her out of the house) are never exploitive.

The depiction of each band also seems to do a wonderful job of depicting their individual personalities. The Dandys are like the kid who looks up to his talented but wild older brother and focuses on being successful knowing he'll never actually be as good. Much of the film's interaction with Courtney and his band are regular talking-head interviews. BJM, on the other hand, is always in the middle of some sort of activity, chaotic or otherwise. Anton's music is often very complex, mixing different styles and utilizing more than your simple guitar-bass-keyboard-drums group of instruments. Anton is a manic and kinetic force, always on the move, virtually unable to sit still unless he's actually playing something at the time.

Timoner's access to both bands was incredible, and the rawness of the footage only enhances the personalities of the bands. Plenty of filmmakers go for a certain look and use quick-cuts and lots of music to go for that indie feel, but it's not always effective. But Timoner deftly handles the pacing of her story so that you're never checking your watch or getting annoyed at the bombardment of sound and images. We watch Anton and BJM perform onstage and wait for the inevitable altercations between bandmembers or the band and the audience, and it never gets old because it's never exactly the same. (And if you want the live Anton experience, check-out the current incarnation of BJM on tour right now, and at Mercury Lounge in NYC on 10/25 and 10/26.)

I have only one quibble with the film as a whole, and that's Timoner's choice to have The Dandys' Courtney narrate the film. During a Q&A after the screening, Timoner mentioned she did so because she didn't want the omniscient voice-of-god narrator and she thought since Courtney was part of the story (and he apparently wanted to do it), he was a good fit. Her reasoning is logical, but I still think she should have provided the narration herself. Timoner is a repeated presence in the film; we hear her voice yell back at Anton during the argument with the ex-girlfriend, and on at least one occasion a bandmember speaks to her behind the camera and mentions her name.

The only reason this matters at all is because no matter how even-handed the film is, and no matter how often Courtney literally expresses his love and admiration for Anton and his music, it's not that hard to read DIG! as Dandy Warhols good, Brian Jonestown Massacre crazy bad. The fact that Courtney narrates the film automatically makes the audience feel like we're sharing Courtney's point-of-view the entire time; can we trust it? If Timoner had narrated as an impartial third-observer, whatever bias – imagined or otherwise – that may exist would be lessened. Anton himself has been criticizing the way he's portrayed in the movie on his web site, and I imagine seeing a movie that started by being about his band before he introduced Timoner to The Dandys suddenly narrated by the person he has come to believe is his rival more than friend can't help level the playing field.

But a quibble is all that is, because I found the choice more interesting than bad. Timoner has made a movie that literally rocks on every level, and in giving us this film which took over the majority of her 20s, she's managed to capture a story that none of us could write if we wanted to. No DIG! isn't a perfect film, but it's as watchable as most films – especially documentaries – come, and you won't see a more interesting and entertaining peek into the mind of the artist coupled with the clash of commercialism anytime soon.

Those rock movies were all fantastic.
I saw the Ramones one at a matinee, alone, and walked over to Bleecker and 2nd afterwards, to gaze poignantly at the epicenter of punkdom.